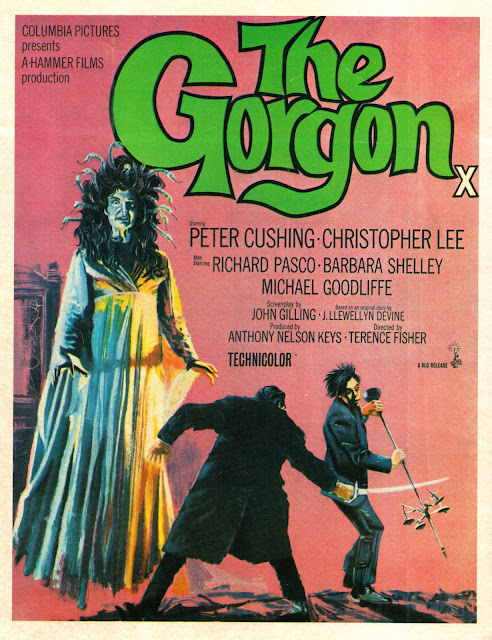 Oh ho and by garr, it’s Burl again! Yes, I’ve got another Hammer picture for you today! It’s The Gorgon, which is one of their better efforts in ol’ Burl’s opinion, and which in many ways, not least its green-skinned female antagonist, greatly resembles The Reptile! Ha ha, in fact, the particularly intelligent screenplay was written by The Reptile’s director, John Gilling! He didn’t direct The Gorgon, though – Terence Fisher did, natch!
Instead of a small Cornish village, we have here a small Central European village! It’s dominated by a sinister castle which no one dares approach, because over the last half-decade, a number of people have been found dead! And not just dead either, ha ha, but completely turned to stone!
There are a lot of characters involved, and almost every review I’ve read, even Phil Hardy’s venerable Aurum Encyclopedia of Film: Horror, gets the details wrong! I’ll try to get it straight for you here: it seems a young bohemian by the name of Bruno is romancing a lady in the little village of Vandorf! But soon enough both Bruno and his beloved have met fateful ends – the young lady calcified and Bruno left hanging from a tree! Well, Professor Heitz, Bruno’s father, is soon in the village, protesting that his son, upon whom the blame for all the murders is being placed, is just a convenient scapegoat! But soon Professor Heitz too is hard as a rock!
In the meantime Professor Peter Cushing from Island of Terror, playing one of his mean-doctor characters this time, is removing brains at the local sanitarium, and his assistant, the beautiful Klara, is troubled! Who is turning everyone to stone? Why is the whole village, and in particular Dr. Cushing, being so secretive about it? Ha ha, and why does she herself disappear for walks in the night which she later can’t remember taking?
More characters show up: Bruno’s brother Paul, who demands answers, and also his mentor, yet another professor played with great gnashing of teeth by Christopher Lee! Ha ha, the movie’s a particular pleasure whenever Lee is on screen, because he tells it like it is! After Paul gets partially calcified after seeing the deadly Gorgon in a reflection, he claims to merely be ill! “Ha ha, ill?” Lee thunders! “You look as though you’ve been in your grave and dug yourself out!”
It’s a terrific picture, because it doesn’t rely on the same old monsters, dear as they are! The same tropes are all present and accounted for of course, but Megaera, as the Gorgon is named, is actually quite eerie, because unfamiliar! Fisher does his usual bang-up job, and Gilling’s script, as mentioned, has a braininess about it that helps immeasurably!
Where the picture disappoints is in the makeup when Megaera is finally revealed! I didn’t mind the fakey snakes so much, but her face, which is meant to be bone-chillingly hideous, looks more like someone trying out as a backup singer for an Aladdin Sane-era Bowie! Too bad! Roy Ashton, the makeup artist, usually did a fantastic job, as can be seen in The Reptile and any number of other Hammer pictures!
Well, it’s hardly the end of the world! The picture is still an enjoyable dilly, even given the ending where, after a misunderstanding-based swordfight, almost everybody dies! On the whole, I recommend it! I give The Gorgon three unctuous coroners!
Posted by Burl at 22:28