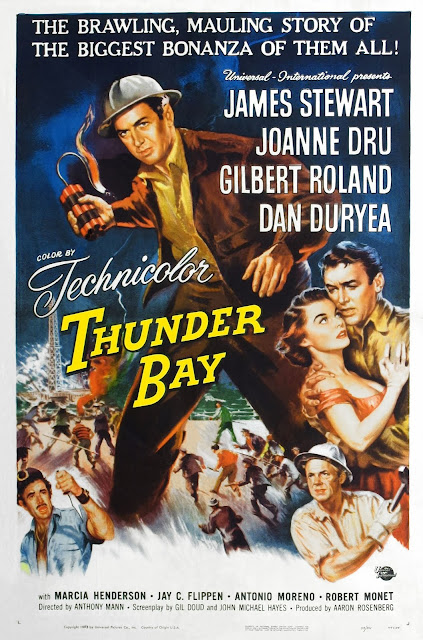 There she blows, it’s Burl! Yes, today I’m here to review a petroleum picture with an obsessed oilman for a main character – but no,  it’s not There Will Be Blood, but another, much earlier one! It’s called Thunder Bay, and surprisingly enough it doesn’t take place anywhere near Thunder Bay, Ontario! It actually takes place in the Gulf of Mexico! Ha ha, don’t that beat all!
Jimmy Stewart from Rear Window plays Steve Martin, who arrives in the little Louisiana shrimpers’ town determined to put up an oil rig there! Ha ha, he’s got plenty of experience and a nose for crude, so if he says he’s an oilman, you will agree! He meets a man willing to stake him – willing, in fact, beyond all evidence or logic to do so, and at his corporate peril too!
But the townsfolk are not so happy to see Steve Martin come to town, nor his pal the tool driver, played by frequent film noir bad guy Dan Duryea! Joanne Dru, who was usually in Westerns, plays the lady who doesn’t think the oilmen will do anything good for the town! And when Steve Martin gets on a boat and starts tossing dynamite overboard, right on top of their shrimp beds, the rest of the town has had it too! They’re not very good at putting together an effective mob though, so Steve Martin and the tool driver don’t actually have much to worry about!
But old Steve Martin sure does talk the oilman talk, all about how great it’ll be for the town and how we all need oil and how his high explosives couldn’t possibly be doing any harm to the shrimp beds! None of it seems all that believable, ha ha, even if it’s Jimmy Stewart doing the talking with his persuasive drawl!
It’s an Anthony Mann picture, but it seems a much lighter confection than those grim, great Westerns he and Stewart did together, like Bend of the River or The Man From Laramie! Stewart himself doesn’t seem all that engaged with the proceedings, though he’s technically good in the part! The movie is largely about the beginning of offshore digging in the Gulf of Mexico, and knowing now where that’s led mitigates some of the enjoyment!
Still, it’s nicely shot in Technicolor and on location, and the special effects are good, and curiously all the Cajuns are played by Italians, except for those portrayed by Mexicans; and anyway we can’t hang all that on Stewart and Mann! It’s a picture with a lot of pep, and the romance isn’t nearly as intrusive as it had every possibility of being! Ha ha, imagine if Douglas Sirk had directed it! That might have been something pretty great, now that I think of it!
But it’s just a fairly routine industrial adventure film in the end, one with a hero not so much complex and multi-faceted as a kind of a jerk! But every time either he or Duryea stray too close to genuine objectionablilty, a bit of Hollywood magic zips in and saves the day with its unrealistic conventions! I enjoyed watching it, though! I give Thunder Bay two and a half Golden Shrimps!
Posted by Burl at 00:28