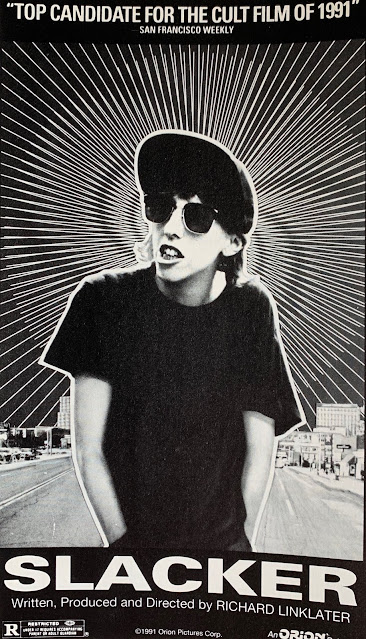 Welcome, friends and citizens! Ha ha, today I’ll review an important movie of the early 90s - it was recommended to me by my friend Mary, who never steered me wrong, and when I went out to the local co-op arthouse cinema to see it, I found that indeed Mary once again knew what she was talking about! The picture was Slacker, and I enjoyed it immensely!

You’ve seen it, I’m sure, so I don’t have to explain the structure - or what an uncharitable reviewer might call the gimmick - of the movie to you! It’s just a day and a night in a specific neighbourhood in Austin, Texas, with our tour guides a succession of people just living their lives! And when this movie came out, I was living my life in a different but similar city among people just like these, so they didn’t seem very strange to me at all! Their eccentricity is more apparent to me now, I suppose, which is a function of aging, but even to this day my circle is mainly artistic people with unusual career arcs!

The wonderful hand-off structure worked perfectly for me - I didn’t for a moment miss a main character or a consistent narrative! (A little more diversity in the cast might have been nice though - there's just one black guy and, even odder considering it's Austin, no Hispanic people at all, save the cab driver at the beginning who never says a word!) I like the long dolly moves, which make it feel like a junior La Ronde outdoors and on a budget, and I like the 16mm photography, even if some of the framing is very odd sometimes! But there's some really elegant camerawork as well, and the sound is really good for a low-budget outdoors picture too! Ha ha!

There are lots of highlights, like the JFK guy, the TV guy, and of course the pap smear, and I’ve always been very fond of the old anarchist; and there are a few nods toward genre and melodrama, as with the hit & run at the beginning, the interrupted burglary, and the missing roommate, which must be the influence of Jacques Rivette’s Paris Belongs to Us! The picture hit so many buttons for me when it came out: it was totally set in my world, even though I’ve never been to Austin! And it was influenced by the same kind of movies I was watching at the time, like the Ophüls and the Antonioni; and the Butthole Surfers were on the soundtrack; and shoowee-howdy-shit, it was really made for 1991 me! Ha ha, I even made a similar movie myself a few years later!

Anyway, it holds up very well today! The musicians, artists, pseudo-intellectuals, real intellectuals, petty criminals, conspiracy theorists, do-nothings, freaks, gearheads and geeks, they're all still around, and it seems to me the movie's relevance has diminished not one bit! It was a terrific debut for Richard Linklater, and led to many further pictures, like Everybody Wants Some!! for instance! I was glad to see it, and grateful to the ever-hip Mary for turning me on to it, and I give Slacker three and a half  TV backpacks!

Email ThisBlogThis!Share to TwitterShare to FacebookShare to Pinterest
Labels: 1990s, comedy, omnibus, regional, saw it on the big screen