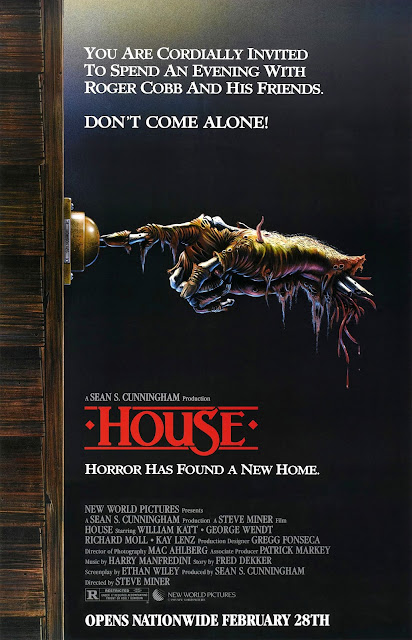 Ding dong, it’s Burl at the door! Ha ha, today I’m going to maintain my occasional habit of telling little stories about my personal experience with whatever movie I happen to be reviewing! The funny thing about today’s movie is that my personal experience involves not seeing it! Ha ha, the movie I’m talking about is House, and not the crazy Japanese one either but the one Steve Miner made to escape the curse of making movies like Friday the 13th part 2 and Friday the 13th part 3-D!

You see, it was around this time of year in 1986 when House was released into theatres! For whatever reason, the powers that be rated it R in my bailiwick, and that meant no one under 18 could see the movie under any circumstances! Ha ha, this rating still mystifies me! Anyway, it was playing at the theatre around the corner from me, and I and two of my friends decided to try our luck! One friend, Rob, would have no trouble getting past the crabby old lady at the ticket booth: at age fifteen, he looked more like he was twenty! My pal Dave, on the other hand, had just turned sixteen, but looked ten! (I myself was fifteen and looked fifteen, ha ha!)

So before the movie I snipped off a bunch of hair from Dave’s head and used spirit gum to construct a fulsome moustache on his upper lip! I worked hard at it and it looked fantastic, but when I was done there was no time left to make one for myself! When we got there, Rob sailed through with no problem, and then Dave, with his big fake blonde moustache, made it in as well! Of course it was me who was refused entrance to the movie, and I had to go home and wait as Rob and Dave enjoyed the film! When they arrived back at my house they said the picture was only okay, and I assumed they were just being nice so I wouldn’t feel bad for missing it!

When I finally saw it, I realized they were right: it was only okay, if even that! And now that I’ve watched it again, my opinion on the movie must be revised still further downward! Here’s the story: a grocery boy arrives at a big Victorian house to find that the old lady who lives there has hanged herself! Her nephew, a big-time horror novelist struggling to write something uncharacteristic (a popular sort of a character, thanks to Stephen King), inherits the house! His name is Roger Cobb, he’s played by William Katt from Butch and Sundance: The Early Days, and his crowded backstory involves the mysterious disappearance of his son, and, separately, a touch of guilt from his Vietnam days, which is what he’s trying to write a book about!

Never mind that William Katt seems much too young to have fought in Vietnam, ha ha, especially seeing as how he doesn’t look any younger in the flashbacks! And it is a flashback-heavy movie, and also a movie of extremely terrible scoopneck sweaters! Luckily Roger’s next-door neighbor is a goofy but kind-hearted guy played by George Wendt from Fletch and Dreamscape, and the scenes involving him have some appeal! Kay Lenz from White Line Fever is Roger’s ex-wife, and Richard Moll from The Sword and the Sorcerer is the old Army buddy who reappears as an angry zombie-man!

The picture occasionally dips a toe into the rubber reality you find in Nightmare on Elm Street pictures, but it seems much more interested in simply having monsters pop out of closets to startle Roger! There are some odd tonal shifts, but neither Miner nor anyone else possessed the deftness of touch to weave these together with any style or elegance! It’s never the least bit scary, and the reason for the R rating that kept me out all those years ago is completely baffling! Ha ha, around here pictures like The Thing and Ghost Story were rated PG, and I and my friends went to see them with impunity and without adults! I can only assume a lozenge became stuck in the throat of somebody on the ratings committee while they were adjudging House, and so the picture got that R!

The upshot: it’s a mediocre mid-level horror picture, professionally made and slick enough, with a few bright spots here and there and some cartoonish monsters! It’s badly edited and relies very heavily on some low dolly shots of the house, which it only needed one or two of instead of the dozen or so that we get! And what’s with that Swedish neighbor cadging child care from Roger? I could discern no point to the sequence, other than to show us that Roger’s fatherhood instincts are still intact! Ha ha, it’s a pretty bad movie, and I award House one wet sweater!
Posted by Burl at 13:11