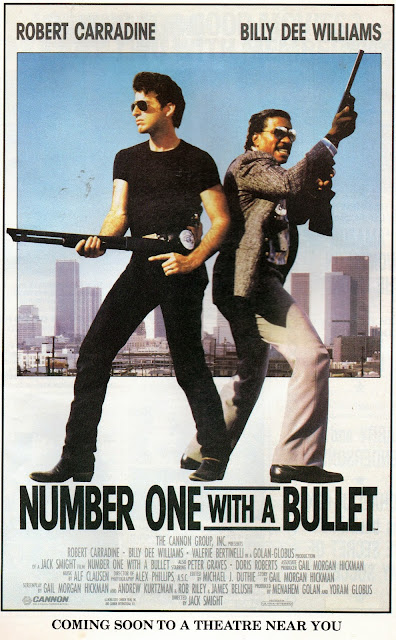 Put your hands behind your head, it’s Burl! Ha ha, yes, I’m here to review another policier from those crazy days, the late 80s! This one is called Number One with a Bullet, and instead of being a Die Hard rip-off (a tradition extending at least to the year 2013 with pictures like Olympus Has Fallen) it’s a Lethal Weapon rip-off! Of course, ha ha, it would be a pretty trick to be a Die Hard rip-off considering Number One with a Bullet came out the year before that action classic – and, come to think of it, may have come along even before Lethal Weapon was released!
Anyway, whichever came first, just as in Lethal Weapon we have a white cop with insanity issues and a steadier black cop who just barely tolerates his partner’s crazy ways of getting things done! The major innovation is that the black cop is not a boring family man but a slick womanizer! Ha ha, since he’s played by Billy Dee Williams, renowned for his cop role in Fear City, how could he be anything else?
The role of the white madman, Nick Berzak, is essayed by Robert Carradine, familiar to us all from his appearances in such diverse pictures as The Pom Pom Girls, Massacre at Central High and Django Unchained! He bugs all the other characters, including his boss Captain Peter “It Conquered the World” Graves, with his obsession to prove the drug-related malfeasance of a local slimy businessman, Da Costa! But nobody will listen to Berzak, so he conducts himself in a wild and out-of-control manner, which essentially means he acts like a big jerk to everybody!
Ha ha, in fact both of these so-called officers of the law trample the civil liberties of their targets with wild, Reagan-era abandon! In the meantime, Berzak pursues a relationship with his ex-wife, Valerie “C.H.O.M.P.S.” Bertinelli, using what may only be called stalker-esque tactics! Naturally these tactics, in combination with Berzak’s abrasive personality and a confusingly-staged scene in which, thanks to her ex, Bertinelli almost gets blown up by a car bomb, are completely successful!
Ha ha, the picture is dumb as a box of dead crabs, relentlessly uncool, and not helped by the nü-jazz score by Alf Clausen, who had apparently not yet developed the breadth of style he would bring to The Simpsons! Ha ha, the tootling saxophones drain every drop of potential excitement from all the action scenes, from car chases to foot chases to violence fights! The movie also feels at least fifteen minutes longer than it should be, the trimmable fat mostly being the tricks the pair use to subvert protocol or just rile one another! And the climax of the movie was so undistinguished that it didn’t even seem like a climax at all – Carradine punches up the extremely underwhelming, unthreatening bad guy a little bit, then the picture ends! Ha ha, cue the sad sound of a deflating balloon!
There are little moments of pleasure both ironic and genuine scattered throughout, however! Carradine manages to be funny once or twice, and it’s great to see Peter Graves do his thing, and the cast generally is competent – hiding in the margins are journeymen like Mykelti “The First Power” Williamson and Bobby “The Supernaturals” DiCicco! But overall it’s something of a zagnut, and director Jack Smight is not able to scale the dizzying heights he did with such older work as Damnation Alley and Fast Break! Altogether, I’ll just have to bestow upon Number One with a Bullet one single dressing-down from the chief!
Posted by Burl at 16:20