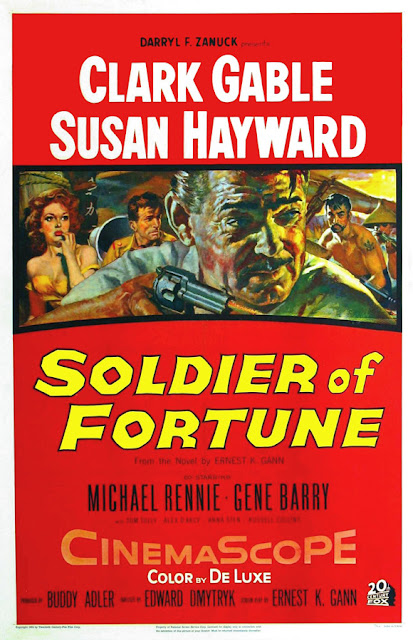 Hi, Burl here, talking to you in w i d e s c r e e n! That’s right, the movie I’m reviewing today was shot in Super-Cinemascope or something along that line, and I mention it because in the end the nice letterboxed cinematography by Leo Tover is pretty much the movie’s primary virtue!
It’s called Soldier of Fortune, which, because of the famous magazine of the same name, might lead you to think that this is a rugged picture filled with high adventure and the never-ending chatter of machine gun fire! There you would be sorely mistaken, though there is some gunfire in the last few minutes of the movie - more on that in a moment!
The soldier of fortune of the title is none other than Clark Gable, but, aside from an opening scene where he rides a funicular train, it seems to take forever before he shows up! The filmmakers throw in a Frenchman who sort of looks like him though, just to throw us off the scent I guess, or make us forget that Gable is supposed to be the star of this picture!
The story is set in Hong Kong, and begins with the arrival of American naïf Susan Hayward, who is searching for her missing photographer husband! She finds out pretty quickly that he’d made his way into mainland China and was immediately arrested by local authorities; how, she wonders, can she possibly rescue him from these nefarious Maoists when both American and British governments have given up? Well, that’s where Clark comes in! He’s a jolly rogue, a smuggler I believe, and the idea seems to have been to make a Harry Lime sort of a character who still manages to be the good guy! We learn, for example, that Clark’s character, Henry Lee, has not one but three adopted moppets, one of whom he is putting through school in the US!
There are scenes set in Hayward’s HK hotel, and others in a bar called Tweedie’s, and in these scenes the movie seems to be aspiring to be one of my very favourite micro-genres, the Eccentric Expat Community picture! There are lots of these, from Casablanca to The Shanghai Gesture to even something like R.W. Fassbinder’s Beware of a Holy Whore, which isn’t actually about stateless fugitives hanging around the lobby of a gone-to-seed hotel in a tropical land drinking endless Cuba Libres, but rather filmmakers doing so, and that’s by any measure close enough!
But that particular approach is as transient as anything else in this picture! The hotel lobby is soon forgotten about, and the various international misfits who pop up throughout the film – exiles from China, Portuguese flim-flam men, British police officers, rough-and-tumble Americans and the brawny French romantic, flit through the picture but only make the briefest impression even if they are a part of the movie’s climax!
The location photography, bright, colourful and exotic, is the best and only reason to see the movie! Well, Clark Gable is pretty good too, exuding his roguish charm as well as he ever did even if he’s a bit long in the tooth for the part; and there are some familiar and welcome faces in the supporting cast, like Jack "Satan's Cheerleaders" Kruschen and Mel "Attack of the Crab Monsters" Welles! And after a curiously muffled and underwhelming rescue scene (who knew the dreaded Commies were such creampuffs when it comes to securing their prisoners!), there’s a bit of gunfire excitement in the junk escape that caps off the movie!
Then finally, back on that funicular railcar, we get the answer to the question which the movie hopes will have been burning in our hearts and minds from the moment Gable steps on screen: will Susan Hayward choose the mustachioed charmer or her rather dumb husband? Ha ha, a foregone conclusion perhaps, but frankly I wasn’t too concerned either way! The wrap-up feels in fact as though it was written by someone who always wished Casablanca ended differently than it did!
I give this pretty, pleasingly exotic but strangely lifeless picture one and a half carafes of American bourbon! I was initially surprised that I’d never heard of it before, but now I think I know why! Ha ha!
Posted by Burl at 10:42