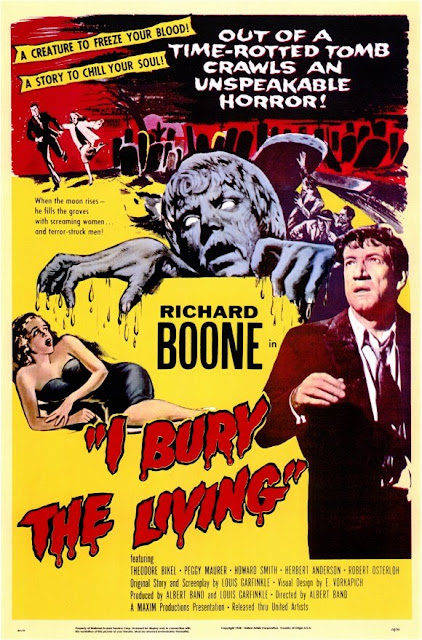 Hi, Burl here with a review of a spooky movie from days gone by, I Bury the Living! This one is a low-budget affair to be sure, but it’s really got something going for it – at least until the last five minutes!
The set-up is a little convoluted and strange, involving the Chamber of Commerce in a mid-sized town who take turns administering the local cemetery for some reason! And this year it’s department-store owner Bob Kraft’s turn! Well, he grouses about it, complaining that he’s got no time to manage a cemetery, but the other guys on the board tell him he’s got to accept and that it’s not too much work anyway!
Well, next thing you know Bob’s spending all his time in the freezing cold cemetery office, shivering and listening to the outrageous Scots brogue of Groundskeeper Willie, played by Theodore Bikel! His name is actually Groundskeeper Andy, not Willie, but if someone told me that he was the precise template for the beloved Simpsons character, I’d have no trouble believing it, ha ha!
The office contains a big map of the graveyard, and each plot has either white pins, for still-living people who’ve purchased but are not yet using their sites, and black pins for those already taking the big dirt nap! Of course what happens is that a distracted Bob puts black pins in where white ones should go, and the people who own those mis-pinned plots suddenly and mysteriously croak! As Bob starts to cotton on to what’s going on he begins to go a little crazy, believing himself to have an unholy power over life and death that no department store executive should possess!
For most of its running time this is a nice little mystery-shocker, and I was even thinking it might benefit from a remake, where the mysterious deaths get more of a spectacular, dare I say Final Destination-type treatment! But the plot development at the end pretty much ruins the whole thing! I don’t want to further ruin it by giving it away to you, but my disappointment was such that I don’t believe I could ruin it further! Let's just say there's some pretty stiff neck-twists involved!
Ha ha, I think I’d rather concentrate on the positive, which to be fair is most of the movie! Richard Boone plays Bob, and I really liked his performance! He seemed more or less like a real guy! I also liked the depiction of the Chamber of Commerce or business association or whatever they were! It gave a good portrait of the community to help contextualize the whole thing! And then of course there’s a spooky graveyard atmosphere to the whole thing, which is always a plus! Ha ha, this could easily have been another tale introduced by Reegor from Ring of Terror now that I think of it!
The movie was directed by Albert Band, the father of none other than the miniature monster obsessed Charles Band, whose works include the Puppet Master movies and of course Metalstorm: The Destruction of Jared-Syn, which I really should review here one day! But as for I Bury the Living, I’ll recommend it with some reservations! I give it two unlikely stranglers!
Posted by Burl at 12:25