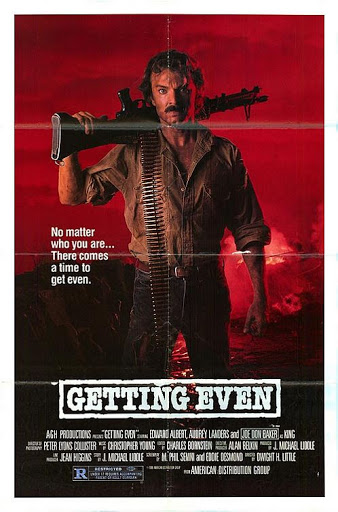 Ha ha y’all, it’s Burl, here with a little Texas action for you! No, it’s not Action U.S.A., or 2020 Texas Gladiators (as apt as that would be in this pestilential year, ha ha!), or Silent Rage, but a minor and largely forgotten morgenstern called Getting Even! It's early work from the little director of Halloween 4: The Return of Michael Myers, ha ha!
Edward Albert from When Time Ran Out and Galaxy of Terror stars as Tag Taggar, a millionaire industrialist from the Lone Star State who doubles, we see in the opening sequence, as the leader of a commando band made up of his friends and employees! Ha ha, it’s almost like the red states wanted their own Buckaroo Banzai, but instead of a rock star / brain surgeon / physicist-hipster with an alliterative name, they came up with a businessman / mercenary / good ol’ boy with an alliterative name!
Tag’s mission in Afghanistan or wherever involves securing several canisters of poison gas, which he then brings back to Texas and places inside a glass cupboard! Meanwhile Tag Taggart’s business rival, a big, robust, evil industrialist called King Kenderson, who seethes with bitter jealousy at every Tag Tagger success, plots to steal the deadly chemical! Since the substance, in its bright yellow cannisters, is kept in full view in the glass cupboard, his operatives succeed easily! Ha ha!
Joe Don Baker, from Fletch, The Living Daylights, and Tomorrow Never Dies, plays King Kenderson, and his performance is one of the picture’s great assets! He manages to make King a properly hateful bad guy in a very human and understandable way, while injecting his character with some humour and the general sense of having a good time! Audrey Landers, meanwhile, plays Paige Starson, an old flame of Tag Taggert’s, who also represents some kind of government law enforcement agency! While her performance is nothing special, the character, in a welcome change from most 80s action, is presented as competent and intelligent, and is deeply involved in the action! Ha ha, by the end, after figuring out some allergy-based clues, she’s piloting a helicopter while firing a machine gun out the door of it while the putative hero is hanging helplessly off a building!
The picture spins its narrative wheels for a good chunk of the middle act as Tag Taggartt and Paige Starson try to figure out who stole the gas! Since we, the audience, have known from the beginning, a certain impatience sets in! Luckily we’re still jazzed from the scene where King Kenderson sends his girlfriend in to test the gas on a hamster, and, after an accident cracks the hamster’s terrarium, can only watch in hysterical horror as she and her assistant melt down into slag puddles! Ha ha, this part reminded me of the more elaborate meltdown in Spasms, which involves Al Waxman and the venom of a giant snake! (An interesting fact: Waxman, as you know, played The King of Kensington, whereas this picture features King Kenderson!)
There are a few faces lurking about that are familiar from various Texas horror pictures! Blue Deckert from The Outing plays the ill-fated Kurt, Tag Tagertt’s good friend whose melted corpse is found hanging from a tree! Caroline Williams from The Texas Chainsaw Massacre part 2 plays the equally ill-fated lady scientist; Dan Shackleford from Deadly Blessing is Raoul, a henchman; and Tommy Splittgerber from Race With the Devil plays a dimwitted gun shop owner! We also get an appearance from Woody Watson of Eddie Macon’s Run!
Except for the narrative glaciation of the second act, the picture moves briskly enough! It could use more meltdowns, and one eagerly anticipates King Kenderson having his own run-in with the gas, but we wait for this in vain! Still, the movie punches a little above its weight in its action scenes, and there’s some impressive stunt work along the way! Getting Even is no masterpiece, not even close, but it’s a night out (or, these days, I should say strictly a night in), and I give it two exploding hamsters!