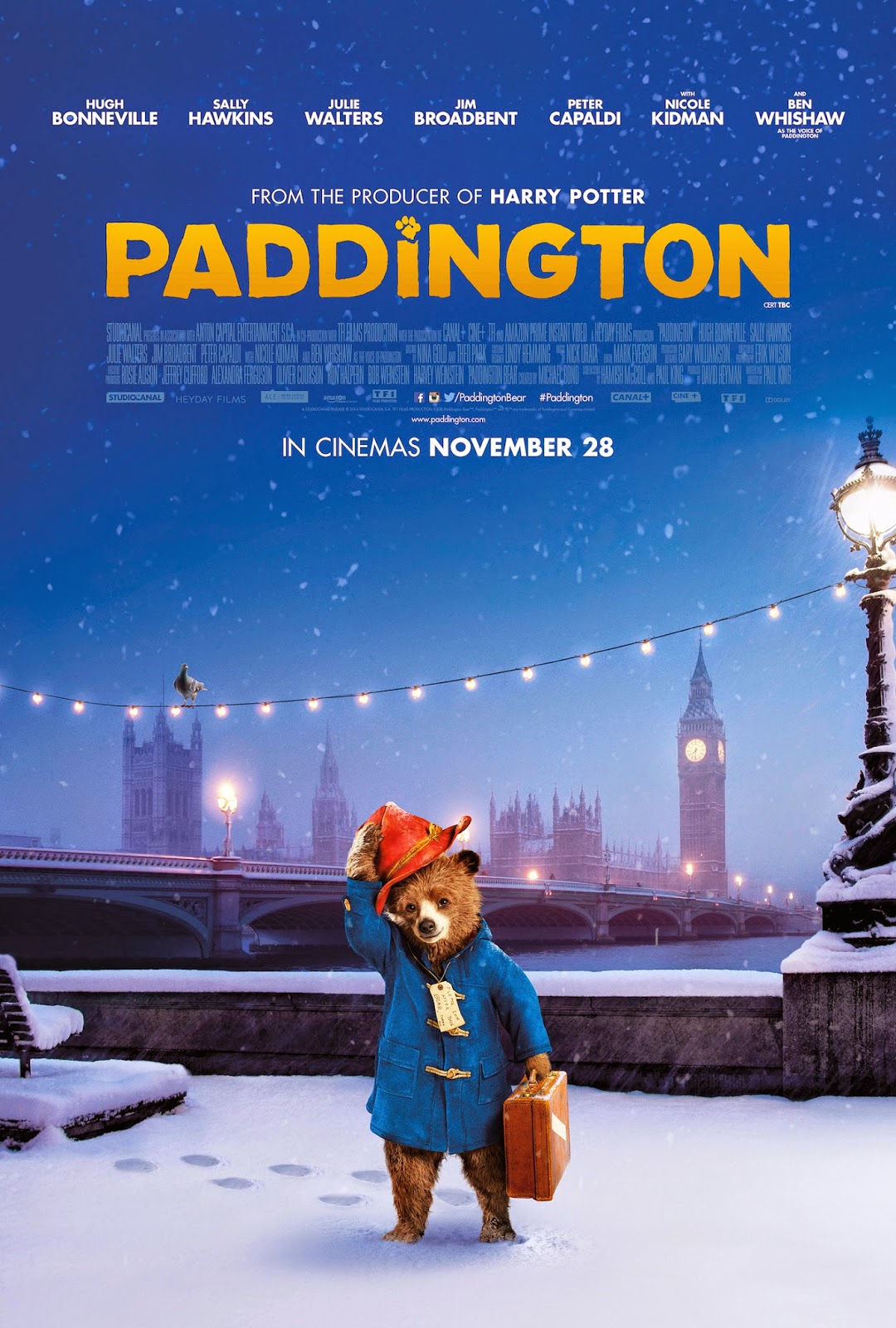 Ha ha, here am I, Burl, to review a movie about a bear! Yes, I went to see it with a very young person, and I think he enjoyed it! I myself didn’t mind the movie overmuch, and I’ll be happy to tell you why!
I remember being fond of the books when I was young, so I had some familiarity with the source material! Here we have a young bear who has arrived in England from Darkest Peru, and he finds himself on the platform of Paddington Station in London, alone and without friends! Ha ha, fortunately for this bear, a family takes him in, christening him Paddington of course, and provide all the marmalade he can eat! The bear, you see, is addicte*d to marmalade!
All of this is covered by the movie, and there is in addition much fleshing out of the family and their various small problems which the bear inadvertently helps them overcome by way of his innocent kindness! Father, once a wild-eyed hippie, is now an overcautious bore! Mother is unable to control her emotions! Sister is terminally embarrassed by her family, and Little Brother flirts too readily with danger!
But the bear is also a bumbler, and this fuels a number of scenes, principally one in which he destroys their bathroom and floods the home! But no grave matter: the housekeeper has this sorted overnight! The thrust of the plot involves Paddington’s search for the explorer who had many years earlier tendered the original invitation to Britain, and the pursuit of him by a lady taxidermist, clearly modeled on Cruela DeVille, who harbors a maniacal desire to stuff and mount him! Ha ha!
Like all fantasy films made in Britain, this picture features a stellar cast of people who would be familiar to someone who, unlike me, has seen any of the Harry Potter pictures! Ha ha! The tweedy paterfamilias is played by Mr. Stink himself, Hugh Bonneville; the mother is Sally “Godzilla” Hawkins; the housekeeper is an unrecognizable Julie “She’ll Be Wearing Pink Pyjamas” Walters; and Jim Broadbent shows up of course; and the meddlesome next-door neighbor is Peter Capaldi from Local Hero! The mad taxidermist is a titanium-haired Nicole “Stoker” Kidman, and the bear himself is voiced well but unmemorably by Ben “Skyfall” Whishaw!
This is one of those pictures in which chronology means nothing: it takes place in the present day, more or less, but the pith-helmeted explorer is straight out of the 1930s and the parents were apparently living in the 1960s when they had their young children! I always enjoy this conceit, and I did again here! There are a number of funny visual gags – one in particular, involving the taxidermy and a wall, is good for a hearty laugh – and some clever script material too! The tone is very nicely achieved and maintained!
But the plot is pretty rote and the climax desultory, and lots of things are borrowed from other sources! Still, it’s an enjoyable kids’ picture, and it moves quickly and looks nice! I’m happy to give Paddington two and a half pneumatic tubes!
Posted by Burl at 02:24