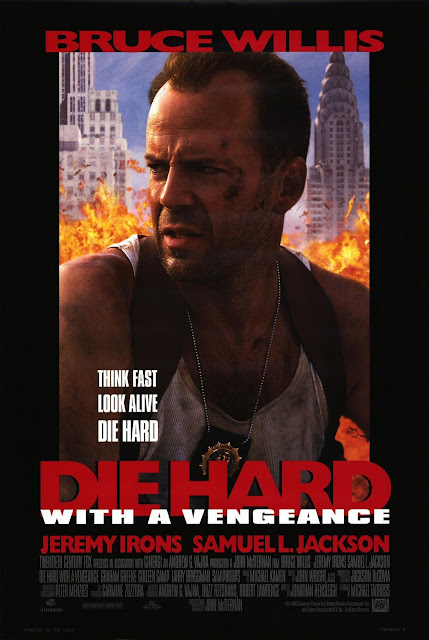 Blammo, it’s Burl, here to review a mid-90s action spectacular! Of course it’s Die Hard: With A Vengeance, the third in the series that was theretofore comprised of Die Hard and Die Hard 2, and ought to have stayed that way as far as I’m concerned! I recall seeing this one in the movie theatre, but couldn’t remember if it was any good or not! Well, now I’ve got my answer: not really terrible, but frankly not much good either!
The script was originally something else, not a Die Hard movie at all, and that really shows! Bruce Willis, perhaps best known from The First Deadly Sin and Moonrise Kingdom, once again stars as John McClane, the dipsomaniacal officer of the law previously seen on multiple occasions happening to be in the vicinity of major terrorist/burglar activities! Here he is again, in the middle of it all but for the first time not entirely by coincidence! Ha ha, just mostly!
It seems the stars of Moonlighting, Willis and Jeremy “Dead Ringers” Irons, are together again for the first time, ha ha! Irons plays a Gruber number two, the brother of the fellow Alan Rickman played in the first one, and is pretending to seek revenge for the time Willis tossed his brother off a roof! It all gets started right away, with an explosion in New York, a phone call from the perpetrator, and the bleary-eyed McClane preparing to undertake that caller’s demand! And, ha ha, that task and a bisection-by-wire that takes place later in the story were all that I could remember from my previous viewing!
Anyway, he has to wear a terrible sign in Harlem, and there makes the acquaintance of Samuel L. Jackson from Exorcist III and Django Unchained! The two jolly pals go on a merry adventure masterminded by Irons, which includes more explosions, or threats of explosion that don’t follow through; crashing subway cars; harrowing Central Park cab rides and many narrow escapes! Ha ha, the very last narrow escape our true-blue friends endure is particularly unbelievable, as they hop off a boat that is in the process of exploding with the force of a Nagasaki bomb!
Cops played by actors as varied as Graham Greene from Seattle’s Loch Ness: The Lake Washington Sea Monster and Colleen Camp from Track 29 are backing Willis and Jackson up as best they can, and indeed by the time of the truck-stop anti-climax, they come through!
It’s curiously forgettable as an action picture – somehow the action scenes, as competently handled as they are, just don’t stick! Maybe they’re too silly and unbelievable, like the time McClane outruns a wall of water in his dumptruck and is fired out a manhole like a balding, unshaven jack-in-the-box! Ha ha! But watching it now, the movie seems curiously if pointlessly prescient! The picture’s now all-too-familiar imagery includes buildings blowing up in New York and citizens running from billowing clouds of dust and debris; its themes touch on race relations and the dispiriting likelihood of black people being shot by police! Ha ha, there’s even a Donald Tr*mp reference! It was all very up-to-the-minute, almost disconcertingly so!
As I said though, even with all that and some sharp dialogue and performances, it’s a curiously forgettable movie! It’s much better than the Die Hards that followed it of course, but not a patch on numbers one or two! I give Die Hard: With A Vengeance one and a half toilet bugs!
Posted by Burl at 13:51

Email ThisBlogThis!Share to TwitterShare to FacebookShare to Pinterest
Labels: 1990s, action, cop, saw it on the big screen, sequel