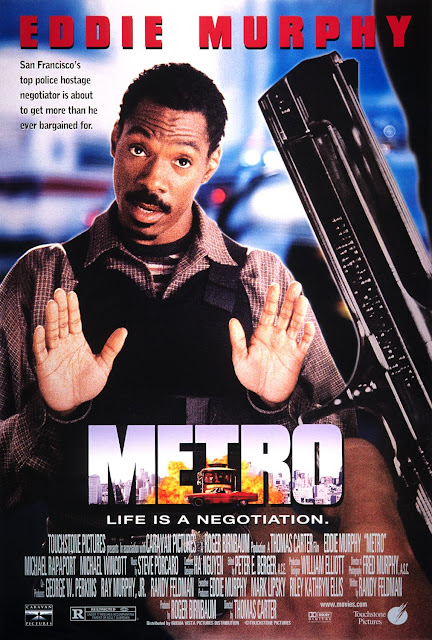 With an okey-dokey sign it’s Burl, reviewing late-model Murphy for you! Yes, thirteen years after Beverly Hills Cop, Eddie Murphy turned up again with another cop-comedy, though this newer picture, Metro, is less a comedy than most Murphy movies, and in fact you might as well go ahead and say hey, it’s not a comedy at all! And that’s fine, because it’s clear that this was one of those career junctures at which Eddie wanted to prove himself a solid dramatic actor!

Ha ha, and I’ll tell you what, he does, because he’s really quite good in this movie! He plays Scott Roper, a San Francisco cop who specializes in hostage negotiation, and in the opening scene we see him practicing his craft on a maniacal bank robber played by Donal Logue from Zodiac!

Of course there’s trouble with the captain, but not so much as Eddie had in Beverly Hills Cop, ha ha! The trouble leads to the movie’s funniest moment: in which, his own car having been compromised, he is assigned an old red pick-up truck, and he grouses “Who am I, Redd Foxx?” Art Evans from Fright Night is Scott’s buddy Sam Baffertt, and because I like Art Evans, I found myself disappointed at the misfortune that befell him! This misfortune puts Scott on the trail of the bad guy, Korda, played by Michael Wincott from Curtains! Scott meanwhile gets a new partner of course, a police sniper called Kevin played by Michael Rapaport from True Romance; and the interplay between Scott and Kevin is so close to the formula enshrined by every single police movie that came before that it differentiates itself from them by an accumulation of small details rather than any real innovation! But ha ha, that approach in itself is perhaps the innovation!

Now this is not an action movie really, but it has a Big Action Scene! In an effort to make good use of the San Francisco location, we get a car chase, but it starts out poorly as though bowing to Bullitt by consciously not trying to outdo it; but finally the scene comes into its own when the bad guy hops a streetcar! From there the chase becomes more destructive and exciting, and ends up a real centerpiece to the picture!

When Korda sends his loser cousin Clarence, played by Paul Ben-Victor from Red Scorpion 2, to kill Scott’s girlfriend, played by Carmen Ejogo from Alien: Covenant, Scott moves fully into Vengeful Cop mode, and the picture itself fully embraces the 80s-era clichés it’s been heretofore firmly holding hands with! Indeed, the climax is set in one of those abandoned factories that seem more a staple of Reagan’s America than Clinton’s; and by the time the damsel in distress is tied to a conveyer hook and moving steadily toward her doom, and the villain would be twiddling his moustache if he had one, the unwary viewer may imagine themself all the way back in Coolidge’s America!

At nearly two hours the picture seems a bit overlong, especially when you compare it to the relatively tight 105 minutes of Beverly Hills Cop! And the conventions pile up, to the point it becomes a bit distracting and not a bit wearing! There’s something almost aggressively generic about the thing, but it does have a few exciting moments, some mild laffs, and a strong performance from Eddie that keeps it all together! Ha ha, it’s sure no prize pig, but I’ll give Metro two bags of doughnuts!