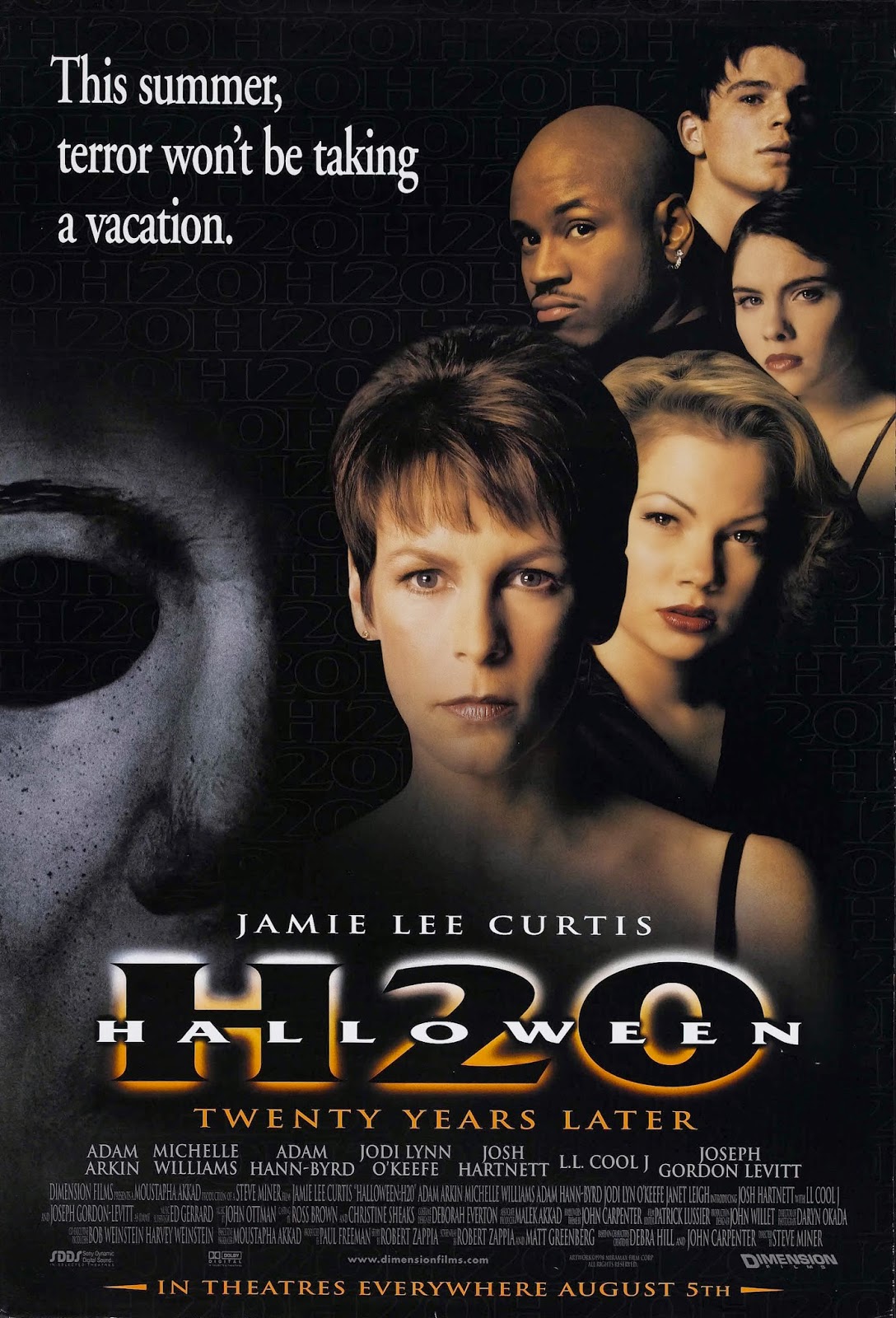 Trick or treat, Burl’s on your doorstep! Ha ha, no, just here in my usual spot! Yes, it’s time already for another Halloween series movie review, and I’m kind of relieved that this one, Halloween H2O, is meant to follow Halloween and Halloween II directly, while ignoring all the stuff set up by Halloween 4, Halloween 5 and Halloween 6! Though, the ending of 4 was pretty effective, and its implications intriguing; but these were apparently dispensed of by 5 and 6, neither of which I can remember all that well, ha ha, so this one, the seventh in the series, had little choice but to make itself a reboot avant la lettre!
Of course, Halloween H2O is a silly title, because it makes us think it takes place in the water, or perhaps on a boat like Friday the 13th part 8! Ha ha, but there’s no water here, just a tony private school in Northern California at which Jamie Lee Curtis, playing Laurie Strode but with a new identity, is the dean! At such a setting we miss the old neighborhood feel of some of the earlier installments, but the filmmakers try to redress this with a lengthy neighborhood-set prologue in which Michael Myers kills the nurse from the first picture along with two youngsters (one of whom is played by Joseph Gordon-Levitt from Looper), who get killed by hockey equipment!
At the school, Laurie Strode is a competent administrator but a mess behind the scenes: alcoholic, jumpy, overprotective of her teenage son (Josh “The Faculty” Hartnett), and seeing phantom Michael Myerses everywhere! So when the real Michael shows up to exercise his inexplicable desire to put a poking on his kinfolk, she thinks he’s just another hallucination! Ha ha! But pretty soon we get some pretty garden-variety stalking and slashing, with Laurie’s boyfriend Adam “Full Moon High” Arkin, young Michelle “Species” Williams, and a few others on the Shatner-masked madman’s kill list!
LL Cool J, well-known from Wildcats, plays the romance novel-writing school security guard, and, of all people, Janet “Psycho” Leigh appears in a small role as the school secretary! She escapes a poking this time, though! We also get see Beau Billingslea from The Blob, whose purpose is simply to explain to viewers that Michael Myers is still young enough to be a formidable slasher!
Michael has always had some pretty sadistic tendencies – recall the hot tub incident in the second picture, for example – but they seem a little ramped up here! He doesn’t poke or slice many people, but several of these deaths are uncomfortably protracted by director Steve “Friday the 13th part 2” Miner!
I recall being a little excited when this picture came out (in the summer for some reason), because the word was it would be good – almost as good as the first one! Ha ha! Well, it turned out to be just okay, and this time around when I watched it, I didn’t care too much for it! It had a couple of effective scenes, and Jamie Lee is always good, and the supporting cast of up-and-comers is pretty strong too; but there’s just something a little flat about it, and I think it was just the wrong characters, the wrong story, the wrong location for this movie! That’s why the neighborhood scenes are better, maybe! They’re almost a mini-movie of their own, appended to the head of this picture like The Crimson Permanent Assurance Company is to The Meaning of Life!
Well, in the end I have to award Halloween H2O a measly one and a half headchops, which the next, and worst, installment informs us was of the wrong guy’s melon anyway! Ha ha! Happy Halloween everybody!
Posted by Burl at 23:47

Email ThisBlogThis!Share to TwitterShare to FacebookShare to Pinterest
Labels: 1990s, horror, Michael, saw it on the big screen, sequel, slasher