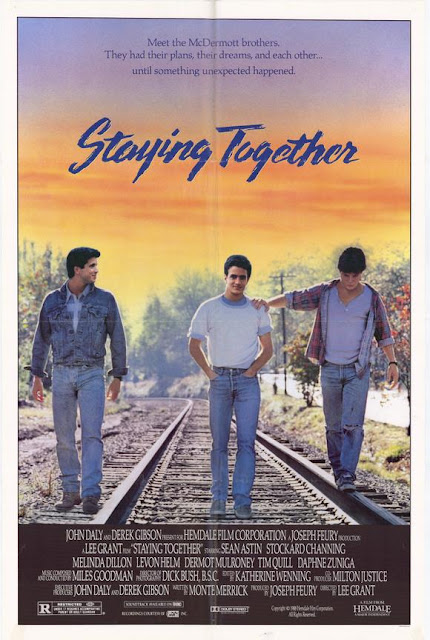 Hi, Burl here to review a movie that doesn’t get talked about as much as it once did, and that was never much at all! Ha ha! The movie’s called Staying Together, and it’s a familydrama-slash-familycomedy that was directed by the interesting and well-known performer Lee “Visiting Hours” Grant!
She herself is interesting, but the movie, regrettably, is about as interesting as its title! Still, ol’ Burl is a positive sort of fellow who always likes to find the good in these things, so that is just what I shall attempt to do! It’s a picture about three brothers whose parents own and operate a small-town chicken restaurant! Ha ha, buck-buck-buck!
Dermot “Stoker” Mulroney, Tim Quill from Hiding Out and Next of Kin, and Sean Astin of The Goonies star as the brothers! Their dad is Jim Haynie of The Fog, and their mom is the lady from Close Encounters! Ha ha! One of them is in love with Daphne Zuniga from The Initiation, and another is making sweet love to Rizzo! Or maybe that was the same one – ha ha, I wasn’t always clear who was who in the picture!
The main conflict comes when Dad decides he’s had enough of cluck and sells off the restaurant! Ha ha, he neglects to tell his sons about this beforehand, and one of them in particular is upset about this! He storms off, ha ha, and the movie goes on! I wonder if it would be telling too much to say that someone dies and the remaining family is brought back together in the aftermath? Ha ha, probably! Anyway all that does happen, and also the littlest brother is kind of a lush; and eventually Levon Helm shows up! Ha ha, one of my all-time favourite drummers!
Well, I guess this is a “life goes on” sort of movie, really just documenting the things that go on to the McWhatever Brothers as they grow and mature and c. and c.! It ends on the happy note most appropriate to as laid-back a tale as this! Ha ha, I was watching the picture in pleasant circumstances, so perhaps I was more willing to buy into that particular vibe than I might have been otherwise, or you might be! Ha ha, so take what I say with a pepperpill!
Well, while it was on I felt it was a bit of a soap opera, competently made but no better, and not a movie likely to live long in my memory! All of that is true, and yet, against all the odds, I kind of enjoyed it! As I say, my circumstances contributed a great deal to that, so you may just find it a plodding little family-life drama featuring a bunch of jerks! And, make no McSteak™, these three brothers are for the most part jerks! They shout and carry on and overreact and fight! But sometimes their fighting turns to wrestling, so ha ha, everything’s fine! You know the sort of movie I’m talking about!
This obscure little drama has its good points (including photography from the amusingly named Dick Bush, ha ha), and I can’t say I hated watching it! I give Staying Together one and a half chicken restaurant demolitions! Ha ha!
Posted by Burl at 23:23