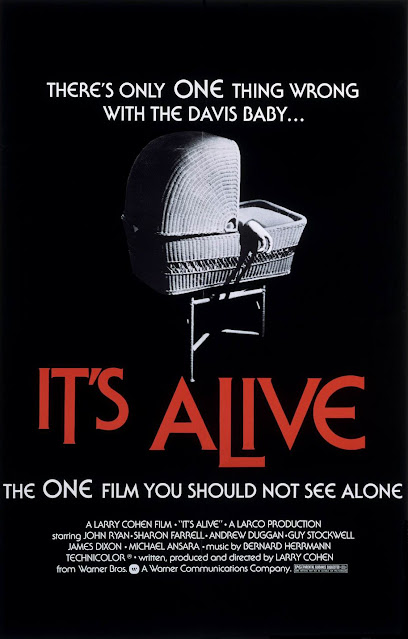 Hello and a-goo goo goo to all of you, it’s Burl, here to review the king of the killer baby movies! Of course there’s only one picture that can really claim this title, and it’s Larry Cohen’s famous tale of cradle-creature terror, It’s Alive! I recall when I was in grade school, ha ha, and it must have been from a reissue when the sequel came out, because I was too young to have any consciousness of the original, but the whole schoolyard was abuzz with talk about the scene with the milkman being attacked, and the street running first white with milk, then red with blood, or anyway pink with the blood and milk flowing together in a cruel sauce!

The plot is pretty simple, even if the movie itself is not! Ha ha, Larry Cohen always was good with a concept, and he knocked it out of the park with this one: an atmosphere filled with pollution results in the birth of a baby which is larger, stronger, and much more murderous than your usual everyday run-of-the-mill infant! This bairn is clawed and befanged, and its first order of post-natal business, set to the sounds of an alarming Bernard Herrmann score, is to slash and claw the attending doctors and nurses, and then escape out of a skylight!

This doesn’t sit well with expectant father John P. Ryan, the stern-faced and almost Neanderthal actor we know so well from Avenging Force, The King of Marvin Gardens, and Three O’ Clock High! His poor wife, played by Sharon Farrell from The Premonition and Sweet Sixteen, survives the monster birth, but slowly loses her mind thereafter, and the baby himself prowls the sewers and shrubberies of Los Angeles and becomes the object of a police manhunt! Without showing too much of the infant, Cohen manages to instill a real sense of sympathy for it; while Ryan, in an excellent performance, goes from wanting to kill the child himself to being willing to lay down his life for it!

Cohen evidently liked to hire tall guys, because everyone in this movie is about 6’2”! Almost-old timers Andrew Duggan, whose final-ever appearance was in Cohen’s A Return to Salem’s Lot, appears as a scientist; Guy Stockwell from Santa Sangre pops up, and Michael Ansara from The Manitou is in there too! James Dixon, also fairly tall, plays a cop called Perkins, and I believe he was the only actor to appear in all three It's Alive movies, and in fact he was a guy who was in just about every Larry Cohen movie there is, and also Maniac Cop, which Cohen wrote and produced!

Cohen is, to me, a fascinating filmmaker! He’s got a singularly primitive style that sometimes makes it seem as though he didn’t know that much about making movies, until you discover the sophistication of the thing woven in, sometimes subsumed, other times on the surface sitting side by side with the primitivism! He’s a strange case, just like J. Edgar Hoover, ha ha, and it’s clear that he in fact knew plenty about making movies, but there were some things, like coherence and slick Hollywood professionalism, about which he simply didn’t care! He liked to use non-actors if he thought they’d be right for the part - real doctors to play doctors, real milkmen to play milkmen, that sort of thing - and that verisimilitude was simply more important to him than the usual day player’s imitative competence!

Like its first sequel, It Lives Again, this is a gritty little horror drama very self-conscious of its socio-political commentary! Of course there was no shortage of environmental thrillers in the 1970s, and this is certainly one of them; but it also seems to me to have a few things to say about modern fatherhood! What they are, I’m not sure, but I know that I connected with not just the father (being one myself), but the little fang-baby too! Like him, I was born with a terrible condition, but rather than making me eat people’s faces it made me unable to keep food down, and so was a real risk to my life but not to anyone else’s! An operation, cutting edge at the time, saved me, but it was touch and go for a while, and my father, on some level believing me doomed, sort of checked out emotionally! He was, and is, an excellent father, but in a way he never fully returned from that check-out, and so there’s a level on which I can appreciate the monster child’s sense of dislocation and his occasional urge to mutilate! Ha ha! So in the end, while it’s surely a flawed picture, I consider that it’s really got something, and what it’s got might be a little different for every viewer! I give It’s Alive two and a half French toasts!
Posted by Burl at 15:14