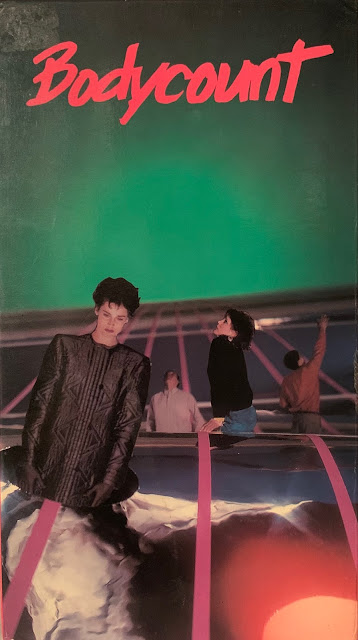 With a just-west-of-Hogtown hello, it’s Burl, here to review some shot-on-video murder! I’m talking Emmeritus today, the Southern Ontario production house that made a series of desperately cheap SOV extravaganzas in the 80s - you probably know Blue Murder or The Tower! Today’s picture, however, is Body Count, and perhaps after all you recall that bizarre video box image lingering unrented in the video stores of your youth!

It seems there’s a murderer on the loose in Hamilton! There’s also a jerky cab driver who has a bad case of Resting Wayne Gretzky Face and who treats ladies abominably! I don’t know if this guy is supposed to be the hero of the picture, ha ha, but he’s frankly impossible to get behind! And for the first twenty minutes or so, we’re lazily invited to consider that the cab driver, Mark Stevens, and the handgun killer may be one and the same!

As the picture begins, an old lady has already been killed, with a card reading “1” left on her body! Soon, in a scene recalling the opening of Zodiac, a young couple having a night frolic in a park become numbers 2 and 3, and highly circumstantial evidence - a red cab such as the one driven by Mark, was observed near the scene - places the cab driver in the crosshairs of Hamilton’s non-crack murder squad! A raggedy, Seymour Cassel-looking cop with a curious polyglot accent is the main investigator on the case, and with every visit to Mark, his threats of arrest grow more immediate!

This is trouble piled upon trouble for Mark! He’s in hock with the loan shark who provided the money for him to buy his cab, and his romantically inconstant nature assures problems in that arena too! After taking a bizarre lady to a graveyard, he happens to meet the sister of one of the victims, who’s apparently just new in town and has nowhere to go! Heedless of the fact that he’s already in a relationship with a waitress, Mark shacks up with the bereaved young lady!

Meanwhile we meet the real killer, a crazed misanthrope called Paul Carter, played by Jonathan Potts from Jason X! An irascible doctor has given him a diagnosis of imminent cancer death, and that increases his feeling of having been hard done by, and does nothing to curtail his campaign of murder! To pass the time, he broods in his movie poster-decorated apartment, then kills his sweet landlady! But like Mark, he too meets a girl: an incompetent cashier played by Cynthia Kereluk from Mark of Cain; and they begin a relationship not dissimilar to the one between Joan Allen and Tom Noonan in Manhunter!

James Knapp from Revenge of the Radioactive Reporter plays a radio host who’s got the face for radio, sure, but the voice for silent film! He taunts the killer over his radio program, and later ends up being held hostage by him! Ha ha! It won’t be telling tales out of school to reveal that the idiotic cops finally shift their focus from the cab driver to the real killer, and blow him away in the only special effects sequence in the picture, which is to say a few squibs and some mild blood bags!

Ha ha, this is a pretty terrible movie! The shot-on-video aspect is one of its more ingratiating qualities, in fact, along with the scene where Mark receives a highly satisfying beatdown from the loan shark! Otherwise its appeal is strictly of the ironical appreciation variety, because by every conventional measure, this is awful! The theme song opening the picture, performed by a highly uncool funk band, is entertaining, but horrible! The acting is funny, but largely unspeakable! The endlessly talky scenes are simply straight-up deadly! Ha ha! In short, it’s Canadian filmmaking at its very worst, leaving even nobortniks like Tulips gasping in the dust of its ineptitude! I give Body Count one half of an After the Fall of New York movie poster!
Posted by Burl at 09:19