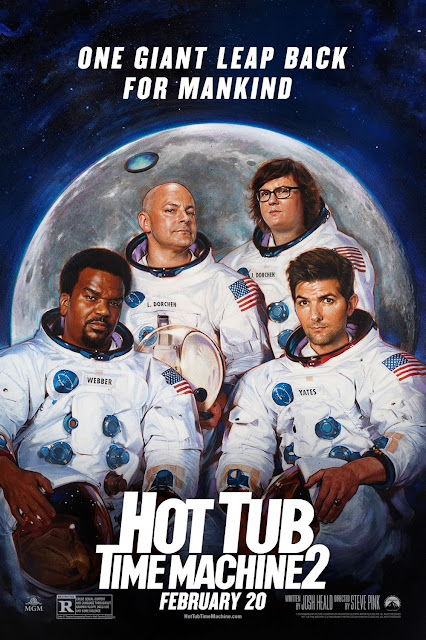 Howdy howdy, it’s Burl, and today I’ve got a review for you of a picture that, ha ha, I can’t believe I watched all of! It was so bad, I’ve got to tell you, and not just bad, but sort of ugly and desperate! But I’m getting ahead of myself: the picture is Hot Tub Time Machine 2, and you now may feel free in joining me in my bewilderment: ha ha, Burl, just why did you watch it? And why are you reviewing it?
Ha ha, I have no proper answer, but we’ll see if I can find one! Now, I did see the original Hot Tub Time Machine in the moviehouse way back in 2010, and, perhaps because I saw it in optimal conditions, which is to say with a group of pals and under certain, ha ha, herbal influences, I enjoyed myself!
I can’t say the same about the sequel! I can hardly bring myself to describe the nonsense plot, but it has something to do with a reworked present involving the loathsome character Lou (played by Rob Corddry from In A World… and The Way Way Back) who stayed back in the mid-80s and has used his knowledge of the future to become a wealthy tech giant! Nick, the more likeable character, has himself stolen future pop songs from the likes of Lisa Loeb and become a famed pop crooner! The babyfat teen who was in the first one is now a butler for some reason, and John Cusack has, evidently, vaporized into nothingness, or been reduced to a singularity, or caught in a moebius whirl, or some other time travel-related affliction! Anyway, he’s nowhere to be seen!
Lou falls victim to a shotgunning, well-deserved, and the race into time is on so that he may be saved! Ha ha, why? Anyway, they end up in the future, where they meet Adam Scott from Our Idiot Brother, who is some relation to Cusack’s character, and wears a grey skirt! Chevy Chase, well-known from Fletch and Christmas Vacation, shows up briefly to deliver puzzling dialogue! Then there occurs a vast number of pop-culture jokes and a lot of movie references! Ha ha, The Terminator is mentioned of course, and pictures like National Treasure and even The Lawnmower Man, just for no real reason!
But seventy-five percent of the gags revolve around the human wil*is, and injuries to the human w*llis, and places in which the human will*s may be ins*rted! Ha ha, it gets pretty wearing! It would be okay if the gags were funny – after all, ol’ Burl’s got nothing against the human wi*lis, or ribald gaggery in general – but they’re not! And, as I mentioned, there’s a strange air of desperation floating over the whole thing, like when drunks shout jokes they believe to be witty into your face at a party!
The only thing worse that the humour are the sad attempts to jiggle our emotions! Ha ha, it just doesn’t work! Almost nothing works, in fact! I’ll admit that a couple of the future technology ideas were clever, and I liked the vengeful car even though that subplot really went nowhere, and there may have been one wan smile in there somewhere, so all in all I’m going to give Hot Tub Time Machine 2 one half of an electric jumpsuit and then never think about it again! Ha ha!
Posted by Burl at 23:16