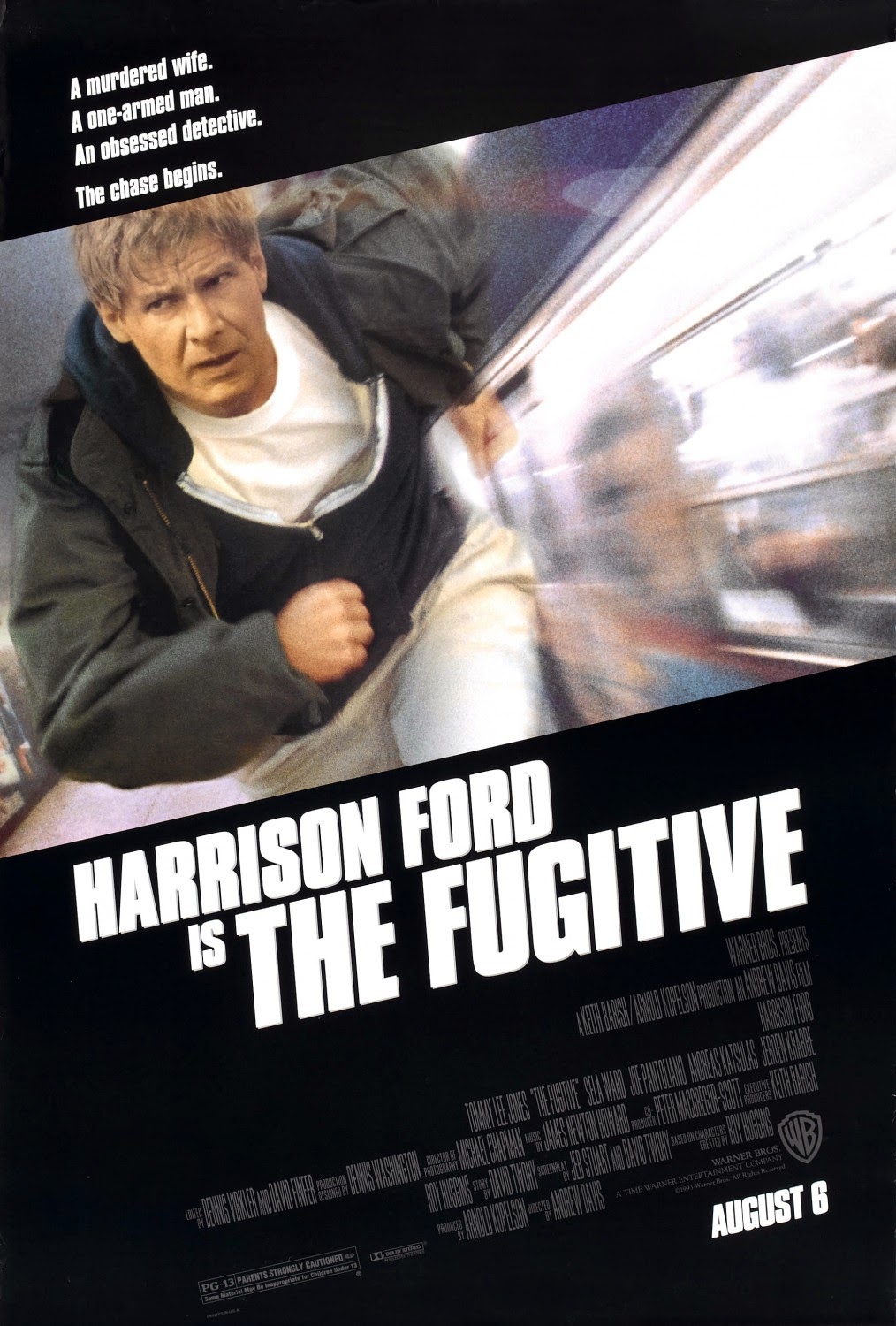 In pursuit of the one-armed man, it’s Burl, here to review one of those solid, middlebrow action pictures from the 90s! This one is of course The Fugitive, and I place it in the same round basket as In the Line of Fire and Heat!
Of course the picture is an update of that old TV series starring David Janssen, whom we know from movies like Cult of the Cobra, Moon of the Wolf and several Francis pictures too! Ha ha, I’ve got to check out one or two of those Francis movies and see if they’re as good as everyone says!
But anyway! We have Harrison Ford, famed from his role in The Long Ride Home, in the role of Dr. Richard Kimble, famous sawbones, who one night returns home to find his wife (Sela “Steele Justice” Ward) dying from a severe bonking, and a vicious unibracch lurking in the closets! The unibracch gets away and Kimble is accused of the crime, convicted and sent to the pokey! But wouldn’t you know it, on the way there his prison bus crashes and there’s a spectacular train crash sequence, very well pulled off by director Andrew “Above The Law” Davis!
Next thing you know he’s on the run from dogged U.S. Marshall Sam Gerard, played by Tommy Lee Jones, the actor well known for his performances in Rolling Thunder and Black Moon Rising! Kimble uses all his considerable smarts to evade Gerard and his posse (which includes that beret-wearing individual Joe Pantoliano, best known from The Final Terror and The Mean Season), and the film depicts evasion after evasion in an episodic style! Kimble is apparently being helped along the way by his colleague Jeroen “The Living Daylights” Krabbé, but there may be hidden agendas at work! The unibrachh is played by a wild-haired Andreas Katsulas, whom we know from Next of Kin, and I won’t tell for sure, but there may be some connection between Krabbé and Katsulas – the K gang, ha ha!
It’s a fast-moving, entertaining, solidly-made picture with plenty of fine actors and suspenseful setpieces! There are a few memorable moments (the bus crash, the confrontation in a huge dam), but otherwise the movie doesn’t linger long in the old memory banks! As middlebrow Harrison goes, though, it’s more satisfying than Presumed Innocent, ha ha! It’s a good Hollywood production, and I give The Fugitive two and a half fake beards!
Posted by Burl at 10:23

Email ThisBlogThis!Share to TwitterShare to FacebookShare to Pinterest
Labels: 1990s, action, crime, mystery, saw it on the big screen, suspense