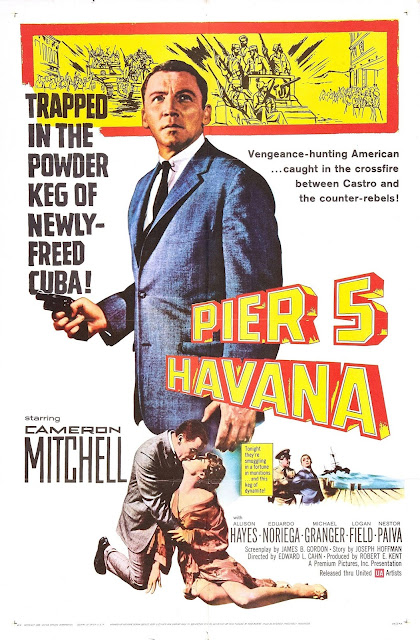 Ày-üho, it’s Burl, here to review a picture shot, at least partially, in good old Havana, Cuba, reportedly in that small window of time between when Castro took power and when Americans figured out that he was a Communist! Ha ha, so it was against the odds, in an era when anti-Communist sentiment was still pretty strong and capitalism venerated as a universal balm, that a funny little anti-Bastista, pro-Revolution mystery-actioner was produced, which we now know as Pier 5, Havana!

It’s a picture made with economy by Edward L. Cahn, who also brought us Creature With the Atom Brain and Zombies of Mora Tau, but they nevertheless did get down to Cuba for some location work, and I even recognized some of the locations! Ha ha, I went to Havana in the 1990s and really enjoyed myself there, and one of the amazing things is that the city, its buildings and its vehicles, its bars and hotels and museums, and even many of its people, seem to have been preserved as in aspic from the very time period depicted in this picture! It’s quite a fascinating place, and I recommend a visit!

Pier 5, Havana is more or less a budget version of The Third Man, with a pugnacious American not overburdened by brains on the search for an old friend who has disappeared! There are big differences, though: here, the American is Steve Daggett, played by Cameron Mitchell from movies as diverse as Deadly Prey, Action U.S.A., Without Warning and Raw Force, and he’s more proactive than old Holly Martins was; while the missing figure, Hank, is a souse, but otherwise a jolly enough fellow rather than a murderous, amoral dealer of bad black market medicines!

Steve Daggett’s adventure through Cuba in its immediate post-revolution aftermath takes him first into the custody of amiable, crafty policeman Lt. Garcia, played by non-Hispanic Michael Granger from Murder By Contract! Garcia in turn takes Daggett to see his old love Monica, essayed by willowy Allison Hayes, perhaps most famous from Gunslinger; she had first married the disappeared Hank and then taken up with a penthouse smoothie called Ricardo, played by Eduardo Noriega from High Risk!

Daggett runs into trouble with a gang of Batista supporters, who put a brutal punching on him and leave him to crawl around on the floor like a hen! Nestor Paiva from Tarantula and Otto Waldis from Artists and Models are part of this gang’s brain trust, and their plot involves bombing various buildings being used by the new Castro administration! Ha ha, by Guevara!

When Hank, a man barely alive, stumbles out of the jeep with which he narrowly escaped from the Batista-ites, he turns out to be played by Logan Field from Halloween 4: The Return of Michael Myers! Ha ha, by this time Daggett is in full noir detective mode and the picture offers double dealings, phone booth knifings, fake crates of chocolate, gangplank rolldowns, and pierside punchfights: the whole bit! The action gets a little talky here and there, and the narrative complexity the picture initially teases us with has dissolved into beardwax by the conclusion! Still, the pro-Castro take is just so unexpected and strange that interest is maintained throughout, and it’s nice to see Mitchell in an heroic role, even if he comes off as a bit of a dimbulb! I enjoyed my viewing, and I give Pier 5, Havana a couple of aspirin!