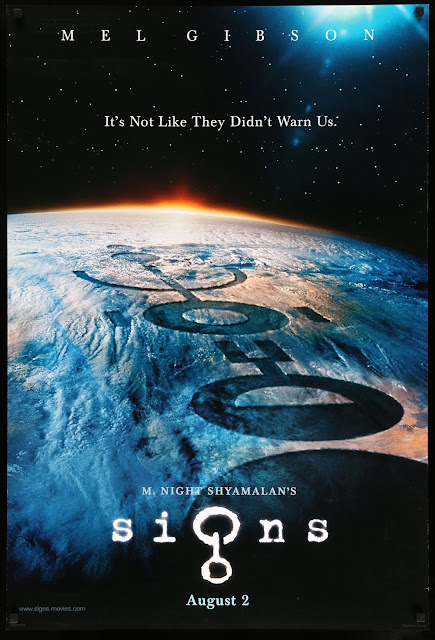 Ha ha, I’ll admit it: I’ve never taken to the hushed self-seriousness of M. Night Shyamalan’s pictures! I do however think he’s often a clever writer, and that his technical chops are strong, and I certainly appreciate that! I should say that I’m not someone who tends to guess twists, because I don’t try to, and also I’m not very good at it! But I guessed the twist in The Village simply by seeing the trailer, and the one in The Sixth Sense surprised me only once I realized it was meant to be a surprising twist - ha ha, I thought we were supposed to know what was going on the whole time! His twistmeister reputation does his talents a disservice, though, and I think that’s especially the case with Signs, the picture under review today!

Mel Gibson from Mad Max Beyond Thunderdome plays a farmer and former friar feeling fragile from the fateful freak misfortune that befell his family! His brother, an ex-ballplayer enacted by Joaquin Phoenix from Inherent Vice, lives on the farm too, and they are fairly remarkable farmers in that they never seem to do any farming! Ha ha! Anyway, one day the crop circles turn up in their cornfield, and Gibson’s two children, well played by Rory Culkin and Abigail Breslin, start acting strange; though one gets the impression this strangeness began long before the start of the story or the arrival of the aliens, or even the death of the wife that caused Gibson to remove his cassock and toss away his collar!

The picture details an alien invasion from a single rural perspective, which is a daring gambit that mostly pays off! Sure, there are plenty of questions: why would the aliens invade this particular corner of the world when they seem otherwise to hover over major cities? Are the corn circles necessary for orienteering purposes, as is speculated, and if so, how is the lack of cornfields in big cities a factor in the aliens’ plan? Of course the biggest question is a callback to The War of the Worlds: how could the aliens have skimped so much on researching the planet they’ve invaded?

I’m perfectly happy to let all these questions go, ha ha! I mean, you can pick apart any story if you’re determined to, and it’s pretty clear that this is a movie less about aliens than about faith: losing it and finding it again under extreme circumstances, as though faith is like the fabled bump on the noggin that first obliterates memory and when applied again, restores it! But right from an early shot of the outline of a removed cross on the wall (which suggests some truly heroic cigarette smoking in the house at some point), the picture is determined to handle this theme with oven mitts on! An irritatingly binary orthodoxy reveals itself, and then pounds us on the head like a hammer in one boring, pushy dialogue scene; and of course by the end Gibson’s requests not to be called “Father” have ceased and he’s back in the uncomfortable-looking cassock and collar! And of course he’s another sort of father once again to his presumably renormalized children!

So all that stuff, along with the usual barbiturated acting and general portentousness of Shyamalan, bugged me a bit; but on the other hand we have sharp lensing from Tak Fujimoto, the terrific cinematographer who shot Last Embrace and Grumpier Old Men and so many other good-looking pictures; good work from composer James Newton Howard; some nice opening credits; some fine cornfield atmosphere; welcome dashes of humour; and well-tuned suspense and spookshow sequences from the talented Shyamalan! It’s quite possible to watch this picture concentrating on those aspects rather than the exasperating thematic porridge, and I recommend doing just that! On balance I admire the film because it does the cinematic genre stuff well, and even though I don’t like what it tries beyond that, and think it does it badly, at least it tries something! I award Signs two and a half bar-b-que forks!