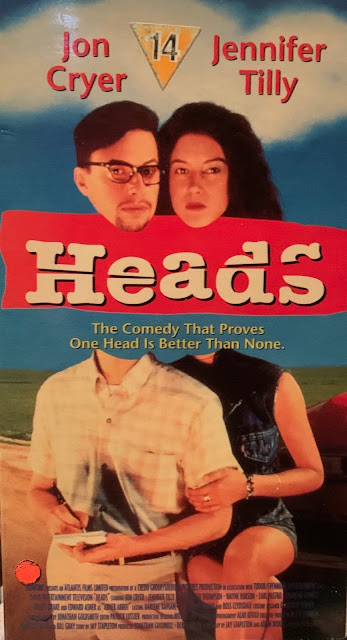 By all the rolling melons, it’s Burl, here to tell of a tale of small town decapitations! Ha ha, it’s time to consider a forgotten film - although forgotten would imply that it was ever known at all, which it wasn’t! No sir, the picture is called Heads, and I’d be a mighty surprised mandanfield if anyone reading this missive has ever heard of it!

Our setting is the small town of Dry Falls, and our protagonist is Guy, the copy editor at the little local gazette, played by Jon Cryer from No Small Affair and Morgan Stewart’s Coming Home! He hopes to become a reporter, and gets his chance when the fearsome editor of the Daily Document, played by none other than Ed Asner from The Wrestler, takes him along to a crime scene at which the paper’s crime beat man has been found lounging in a deck chair at poolside, and his head bobbing in the pool several feet away!

Further casaba-choppings ensue, and leather-jacketed Earl Pastko from The Sweet Hereafter is the chief suspect; but then again this town has plenty of suspicious denizens! Why, even Roddy McDowell from Doin’ Time on Planet Earth and Fright Night is lurking about as the local moneybags, a fey character in an ice-cream suit, totally beholden to his pet greyhounds! And the next thing you know Jennifer Tilly, whom we recall from Moving Violations and Remote Control, pops up and begins making strange overtures to our hero! Could she be the mad top-popper? Ha ha, maybe!

Severed heads show up on top of buildings, or else rolling down the street, or in farmer’s fields or what have you, but the movie somehow doesn’t make much of them! It might be fair to say, in fact, that the movie doesn’t really know exactly what it wants to be! Certainly it’s trying for dark comedy and murder mystery, and also it wants to be a kind of small town picaresque, but none of it gels very well! In any case, it’s hard to explain how a movie called Heads can make such small potatoes of what one assumes was meant as its chief attraction and major selling point! I suppose they didn’t want to be too lurid, ha ha, but it also smacks of timidity!

Guy is virtually the same character Don Knotts played in The Ghost and Mr. Chicken: a cringing ninnypants newshound whose only accomplishments come by accident! Ha ha, I’m sure they would have hired Knotts for the role if he was a little younger; though it ought to be said that Cryer is perfectly good in the part, even if his character is frequently annoying! Ed Asner is plenty of fun here though - ha ha, he jumps into his character and goes at it full-bore, not minding whose toes he steps on in the process! McDowell makes a tasty little snack of his brief role - ha ha, there’s a pro for you! - and Tilly does her baby-doll thing, but seasons it with sadness and regret!

It’s pulpy, but not to the degree and in the manner the makers intended! There are a few attractive shots thanks to cinematographer Alar Kivilo, who on this picture was forced to work, at least part of the time, with a broken light meter! It could have used a little more pep and dynamism I think too, and might have given us a more active and less enervating protagonist! Maybe the best thing you can say about it is that it’s something mostly all its own! Mercifully it doesn’t try to be Lynchian or Tarantinoesque, or Finchereuw avant la lettre, at least not in any recognizable way; it seems to believe it’s a parody of something, but of what? The small-town serial-killer newspaper picture comedy genre? Ha ha! I give Heads one and a half battered Airstreams!