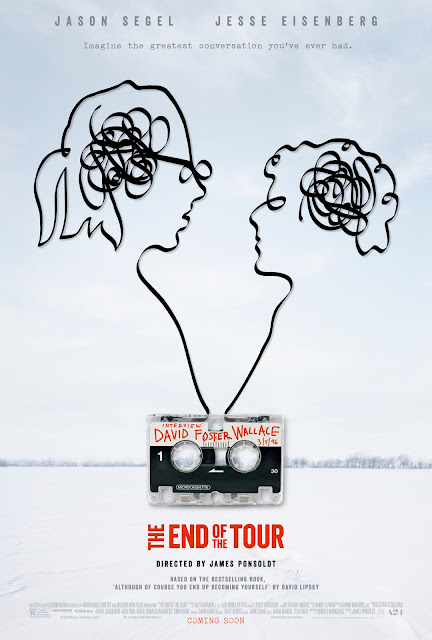 With a bookish hello it’s Burl, here to review a literary two-hander that came out a while back, and I’ve just now caught up with! It’s a tale of fellers who write books, and shows what can happen when two of them spend a few days in close company with one another! Yes, the movie is The End of the Tour, the tale of the meeting between a Rolling Stone reporter named David Lipsky and the bandanna-clad wordsmith David Foster Wallace!

Jason Segel from SLC Punk dons the doo-rag in order to play the celebrated author, and I’ll say right up front that I though his performance was terrific! I’m not familiar enough with the real DFW’s voice, look, and mannerisms to do a detailed comparison, but, ha ha, in any case impersonation is beside the point! Segel does an excellent job of creating the character of a shy, friendly, humble, prideful, whip-smart, uncertain, spiky, obliging, bewildered and ambitious man, no matter what his initials are!

Jesse Eisenberg from Adventureland and Zombieland enters Wallaceland in the character of Lipsky, assigned by Rolling Stone to accompany Wallace on the last stop of his Infinite Jest book tour! This last stop turns out to be Minneapolis, which is a city I’m pretty familiar with, so that was nice! The requisite Fargo-ness comes in the person of Joan Cusack from Grandville U.S.A., their perky tour guide and driver, but the city is otherwise portrayed as the bastion of NPR-level mainstream sophistication that it is, for the white, college-educated set anyway!

The bulk of the picture involves these two Davids getting to know one another, mostly in a mellow way but interrupted on occasion by neuroses and jealousies! It’s a pretty male movie, but there are ladies: Anna Chlumsky from Uncle Buck appears in a nothing, mostly phoned-in part as Lipsky’s girlfriend; while in Minneapolis Mickey Sumner from Frances Ha and Mamie Gummer from The Ward show up as Betsy and Julie, two DFW pals with whom the Davids hang out and, in a delightful sequence, go to Mall of America and catch a screening of John Woo’s Broken Arrow!

At several points in the picture, when Lipsky gets upset, Eisenberg pulls out one of his acting staples: a hurt, about-to-cry face that makes me want to jump up and run away whenever I see it! I didn’t care for that, nor for his amateur-hour smoking (it looks practiced, but fake), but on balance I think Eisenberg did a good job in his role! It’s a real pleasure sometimes to watch a movie about intelligent people having intelligent conversations, and this one hit me at just such a moment; and on top of that it’s solidly directed and features unexpected treats on the soundtrack! Ha ha, there are some 80s tunes and some Alanis to shore up Wallace’s contention that he has the musical tastes of a thirteen year-old girl, but R.E.M., Pavement, and Brian Eno all get a look in too, plus there are a couple of Tindersticks tunes, and most unexpectedly, a Tindersticks cover of a Pavement song! Ha ha, weird!

It’s necessarily limited in what it can do, but the movie is smart enough to know that, and so it just cruises along in its pleasant and competent way through appealingly familiar territory! I enjoyed it, though of course the ultimate fate of DFW made me sad! Still, this was a supposedly fun thing that I might very well do again, and I give The End of the Tour three pop tarts!