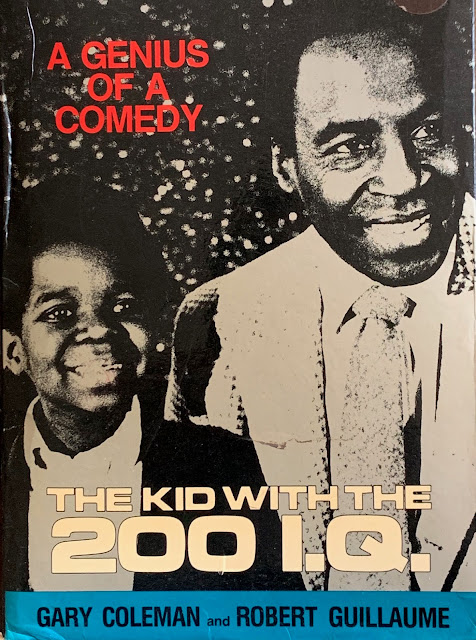 With a demand to know whatchoo talkin’ ‘bout, it’s Burl, here to review a movie featuring that undersized imp of cinema and television Gary Coleman, whom we may recall from Dirty Work! Ha ha, he had a real corner on the precocious kid market back in the 70s and early 80s, and in the movie under discussion today, The Kid with the 200 IQ, he may have hit the absolute peak of precociousness!

His characters were always supposed to be smarter than other kids that were putatively his age, but here he plays a super-genius riding an academic scholarship into big people’s college, and how could the precociousness formula be more finely honed than that? It couldn’t! Coleman plays Nick Newell, who arrives at the college with his pleasant family and then must endure scene after scene of people doing double takes at him when he explains that yes, he is enrolled in the college! He lucks into an amiable roommate in his dorm, an athlete called Steve played by Dean Butler from Desert Hearts; and because the dorm is co-ed (Wink wink! Nudge nudge!), he gets to know a young journalism student named Julie, essayed by Kari Michaelsen from Saturday the 14th!

It seems that Nick’s area of interest is astronomy, and he’s most excited about taking a class with the imposing Professor Mills, played by Robert Guillaume from Seems Like Old Times and Death Warrant! But Mills is one of the few not charmed by Nick’s exuberance, and in fact seems to resent the little fellow’s presence! And as the semester continues so do Nick’s troubles grow, presenting some real challenges to his 200 I.Q.! Ha ha, he bombs with an astronomy project for Mills’ class, he falls in love with Julie only to be heartbroken when he sees her getting friendly with Steve (whose advances she had initially resisted due to her hatred of jocks), and he endures very mild bullying and humiliation from a toffee-nosed frat bro after beating the older fellow in a game of Defender!

He has lots of friends, though: Mills’ daughter is a friendly cutie nearly as precocious as Nick himself; there’s a kindly caretaker called Debs played by Mel Stewart from Dead Heat; and Steve and Julie stick by him resolutely, sympathizing with his romantic travails! The climax is a Road Warrior-style chase scene in which all of Nick’s friends, including an abashed Mills and the reformed frat bro, chase after the Greyhound bus Nick has hopped to take him home and away from the university he no longer feels a part of! But of course it all ends happily enough, with Nick now Dr. Mills’ number one helper, welcoming to the pre-semester party freshman Crispin Glover, well known from Rubin & Ed and Friday the 13th: The Final Chapter, in the role of a newly-arrived astronomy student!

While we must admit that Coleman is not as adept at playing a super-genius as, say, Jason Segel in The End of the Tour, he’s nevertheless not bad, and packs a lot of charm into his diminutive frame! Guillaume is required to walk a tightrope between cold and stern on the one hand, and affable and avuncular on the other, and he does it well! The TV movie-ness of the whole thing is undeniable; though Coleman did some theatrical features (I remember seeing Jimmy the Kid at my local cinema), this was assuredly not one of them! It exudes a strange charm, though, as many artifacts do by virtue of their ability to evoke the past! Ha ha, I give The Kid with the 200 I.Q. two rounds of Defender!