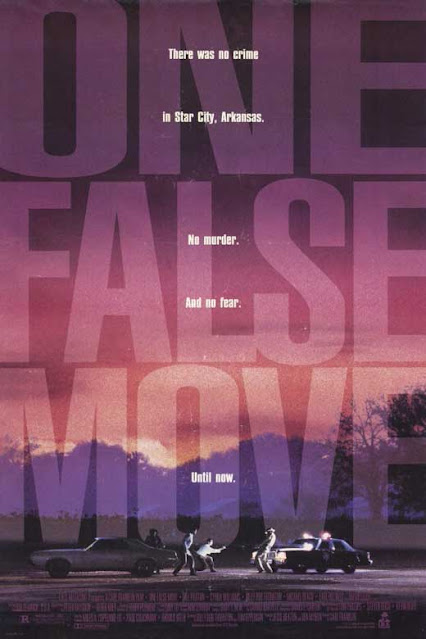 Ha ha, it’s Burl here to review crime drama! Yes, here’s a picture I’ve been hearing about for years, and hearing plenty of plaudits about, along with commentary in the nature of it being an unheralded gem! Ha ha, it seems plenty heralded to me! But still maybe not enough, because it turns out to be a very solid movie! The picture in question is One False Move!

If the movie ever makes the titular move it might be with the title, which is boring and meaningless! Otherwise we have some pretty good stuff here, and it all opens with a terrible drugs massacree perpetrated by Ray and Pluto, two vicious goons played by co-screenwriter Billy Bob Thornton, whom we recall from Hunter’s Blood and The Man Who Wasn’t There, and Michael Beach from The Abyss! Ray is your basic Billy Bob Thornton character, greasy, violent, touchy and dim, while Pluto wears elegant specs and is much smarter, but is bigger and stronger and even more brutal in his methods! The third leg of this little gang is Fantasia, a.k.a. Lila, played by Cynda Williams, and it’s evident that she didn’t think it was going to be a massacree, or at least had convinced herself that it wasn’t going to be!

The L.A. cops in charge of the investigation include Cole, played by Jim Metzler from Sundown: The Vampire in Retreat, and McFeel, played by Earl Billings from Con Air; and soon they’re tracking down a clue that leads them to Star City, Arkansas, a little backwater policed by a garrulous striver played in full cornpone mode by Bill Paxton, beloved of Aliens and Weird Science and so many others! This is one of his very best performances: his Sheriff, known to all as Hurricane for his constantly running mouth and inability to sit still for restaurant meals, is an annoying big talker who’s not a bad guy but just does not get it, ha ha! I don’t think many actors could have pulled the character off quite as well as Paxton, especially once things really start happening and we learn more about Hurricane and his secrets!

Of course our nasty bad guys are on their way to Star City, each for their own reasons, and the Arkansas constabulary is monumentally ill-equipped to deal with such human monsters! I won’t tell any more plot, ha ha, as the unfolding of the story is one of the movie’s major pleasures! Another is the acting, which is stellar all around; and yet another is the film’s subtly realistic portrayal of race relations! Half the characters are black and half white, some characters are half black half white, and while a big deal is not made of any of this, it’s a deal nonetheless, and few American films have grappled with the issue in quite this way! The film was written by white fellows and directed by a black man, Carl Franklin, and perhaps this racial bifurcation behind the camera is responsible for the elegantly worked-out theme before it! In any case, it’s something strange and unique!

Franklin, whose previous picture was the Roger Corman submarine picture Full Fathom Five, does excellent work here, and though the picture has some rough patches for the more sensitive souls among us, the ultimate result is a hard-boiled crime delight in the spirit of Jim Thompson! It probably is underappreciated, but on the other hand it started Franklin and Thornton on fine careers and gave Paxton a marvelous showcase too, so it’s hardly unappreciated! Certainly not by me, anyway: I give One False Move three and a half shin kicks!