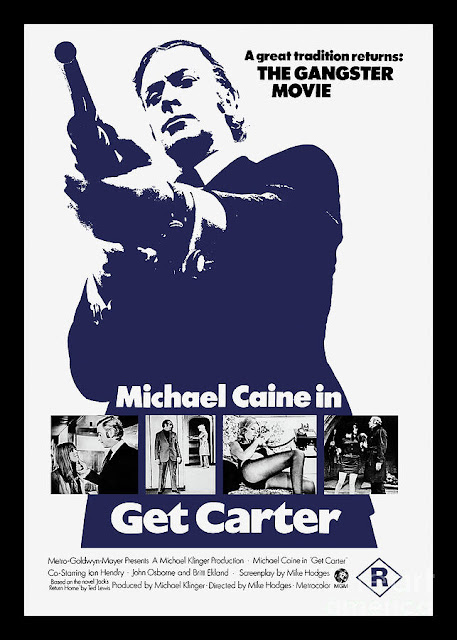 ‘Avin’ a butcher’s, it’s Burl, here with a tale of Blighty gangsterism and blood vengeance! Yes, it’s that classic tale of the wide boys and hoodlum kerfufflement, British cinema’s own Get Carter! It’s a hard-edged limey classic, and I suppose many a junior racketeer latched on to this picture as the epitome of jolly old toughness and crikey cool!

Michael Caine from The Island and Jaws: The Revenge essays the role of Jack Carter, a London-based hard case who hears tell that his brother has been killed up in Newcastle! It was apparently an accident, but Jack doesn’t believe that for a second, ha ha, even though his brother wasn’t himself a gangster and would logically have no reason to get himself killed in a mob hit situation! In any case, Jack wants revenge and he’ll get it by crimble or by crouton!

Just about as soon as Carter gets off the train he tracks down a whole marvelous gallery of British hatchetfaces like Ian Hendry from Theatre of Blood, Tony Beckley from The Lost Continent, and the silky-toned playwright John Osborne as the pornographer Cyril! All of these fellas are gangsters, of course, and are all involved to one degree or another in the killing of Carter’s sibling! And Carter offers no quarter to these nogoodniks, pushing them into ponds or tossing them from parking structures as he sees fit! Ha ha, the climax involves a massive beachside dumping machine of the type one associates with 1970s England whether one knew they existed or not!

Britt Ekland from The Man with the Golden Gun is Carter’s ladyfriend back in the big city, with whom he makes sweet telephone love, which gets awkwardly halted - ha ha, loquerus interruptus! And then later, Carter plays a game of bohankie with his lumpy landlady, and that too gets interrupted when hoodlums bust in! Carter must grab his trusty shotgun and see them off in his birthday suit, ha ha! Carter finds the gun in the first act and carries it around all through the final act, but he never fires it, which may seem in contradiction to Chekhovian convention! Except that he does eventually use it as a bludgeon, ha ha, and I think that must count!

There’s lots to admire in this brutal and bleak picture, not least the symphony of great voices on display! Aside from Caine, there’s Hendry and Osborne in particular, and just about everyone is fun to listen to on some level! The atmosphere is exactly that I recall from my early trips to England, which weren’t until the mid-80s, but things don’t seem to have changed much! The photography from Wolfgang Suschitzky is top notch, and Mike Hodges directs it very assuredly for a chap making his first feature! There’s a lot of appealing craft on display, but it’s not always a pleasant watch, nor does it amount to all that much in the end! Still, plenty to admire here, and so I give Get Carter three appalled neighbours!