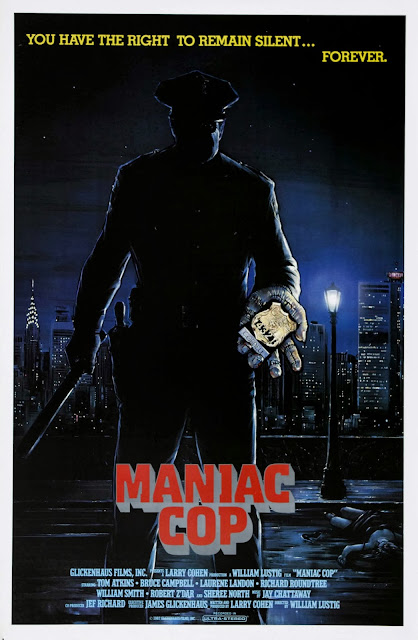 Calling all cars, it’s Burl! Ha ha, no, you’re not under arrest, it’s just me, Burl, here to do another review, this time of a cop-themed picture! Yes, it’s a review of Maniac Cop, a picture by William Lustig, the director of Maniac! Certainly this is a man with a fascination for maniacs!
In New York City, an officer of the law is making a nuisance of himself by killing everybody he sees! The town is in a panic, and good old Larry “A Return to ‘Salem’s Lot” Cohen, who wrote but didn’t direct this, once again gets to show off how good he is at creating a larger canvas out of very little cloth! What I mean is, he really gets across the feeling of a city in panic, and takes care to really put across the feeling of what the ramifications of a killer cop might be, socio-politically speaking!
At any rate, the cop is sort of an undead guy, or maybe he was only nearly dead, as in The Princess Bride; but at any rate, he’s got superstrength and a resilience to bullets, so he seems like a zombie along the line of Part 6-era Jason! On the other hand, while he thrillkills left right and centre, he has an agenda and a planned list of specific victims! These latter unfortunates are the politicians and police officials who were behind his disgrace and imprisonment some undetermined number of years earlier! Then he was murdered, or at least partially murdered, in prison, and ended up as this might-be-a-zombie cop! Ha ha, Larry Cohen is not always quite as good at filling in the details of his stories! Anyone who has seen The Stuff or God Told Me To will know this!
So there are some vague elements to the picture, but on the other hand it has a dream exploitation cast from beyond the moons of Jupiter, with just about everybody in it playing a cop! You’ve got hard-nosed detective Tom Atkins, well known from The Fog and Halloween III! Bruce Campbell is in there, playing, in his earlier scenes, the closest thing to straight drama I’ve ever seen him attempt, with the possible exception of The Woods! Ha ha, Laurene Landon, seen in Armed Response and Roller Boogie, plays his girlfriend! Richard Roundtree, John Shaft himself, is the police commissioner! And then you’ve got William Smith, well known as Lucky Man from Fast Company, and the mighty hubcap Robert Z’Dar as the killer! Ha ha, wow! A few of these personages are underused, or used badly, but that’s still a heck of a marquee!
Unfortunately the maniac cop, while an imposing figure, looks a bit silly in his makeup! He looks like someone went to the bathroom all over his face! But, while the movie foozled a lot of people who were expecting a Savini-esque bloodbath, it still delivers the pokings and the slashings, along with quite a few stunts (in the manner of a more modest The First Power, now that I think of it!) and plenty of hard-boiled dialogue! There are actually some pretty good laffs in the movie!
I’ve never seen any of the sequels as far as I can recall, though if I’m to review all the movies, as is my stated goal, I’ll eventually get to them I suppose! In the meantime, this was a fine bit of B movie entertainment: one that tries a little harder than most of its fellows! I’m going to give Maniac Cop two and a half St. Patrick’s Day parades!
Posted by Burl at 00:01