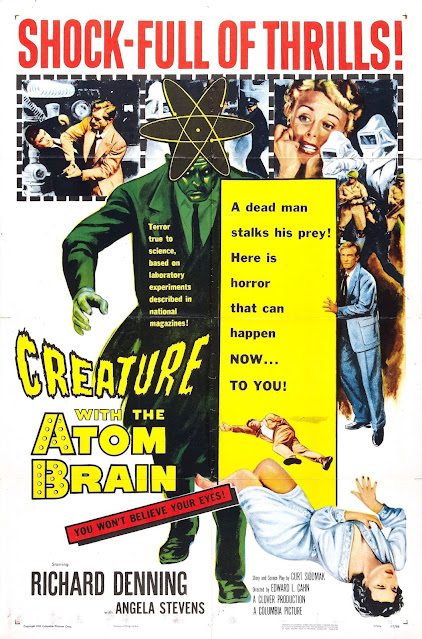 By the atom brains it’s Burl, here to review a tale of nuclear zombie-men! Yes, we’re in the low-budget realm here, the territory of the little genre programmer, talking about an ephemeral movie that was never intended to be watched, spoken of or written about beyond its initial theatrical release, or possibly a television sale later on! Of course the picture I’m talking about is Creature with the Atom Brain, and how could it be any other? Ha ha!

We open with what turns out to be the most atmospheric shot in the entire movie: a bulky, pudding-faced man clumps up the street, looking and acting halfway between Boris Karloff and Tor Johnson! He’s an atomic zombie on a mission, putting a casino baron into a fatal bundabeya, then lumbering back to his car oblivious to the hail of lead being fired into his back by henchmen! Ha ha, turns out he's being radio-controlled by a formerly exiled gangster who, having hooked up with an ex-Nazi scientist and covertly returned to America, is stealing corpses, wiring up their brains, and sending them out to fold, spindle and mutilate the people responsible for his conviction and deportation!

Richard Denning from The Black Scorpion and The Oklahoma Woman, and of course The Creature from the Black Lagoon, plays the police laboratory man who’s puzzled by the strange clues left behind at the murder scenes: splashes of radioactive blood, glow-in-the-dark footprints, victims whose bones have been crushed! And there’s what seems like a separate mystery, but isn’t: the bodies of gangsters gone missing from the morgue! Denning's atomic zombie theories are made fun of by a local television anchor, but the newspaper writers seem to swallow them whole! Why, just look at those headlines! 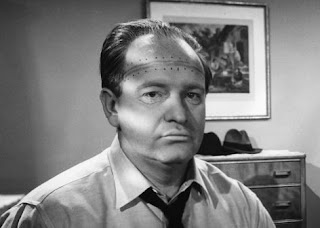 The gangster behind it all is named Frank Buchanan, and he’s played by Michael Granger from Murder By Contract! Buchanan and his scientist pal have holed themselves up in a lead-lined mansion within which they and their equipment are undetectable by the boogie-cars roaming the city in search of telltale radioactivities! Meanwhile Denning and his partner/buddy Uncle Dave (as he’s known in the Denning household) try to convince the local newshounds that there really are atomic zombies, and do their darndest to find Granger’s hideout!

There’s lots of pipe smoking in this picture, but also some actual detective work, which, in concert with the goofy premise, gives the picture a unique tone that straddles police noirs like The Big Heat and genre goofs like producer Sam Katzman’s Zombies of Mora Tau! It gets some extra credit from me for using squibs to illustrate bullet hits when the zombies are shot - ha ha, I can’t think of any earlier movies that did that! And it gets more credit still for inspiring a fine Roky Erickson song!

It’s a little poky and repetitive, and the tiny budget hurts it occasionally, but I do tend to go easy on movies that take ridiculous ideas seriously! There’s some good ‘50s domestic stuff, but it bugged me whenever Denning, who blabs freely about the case to everyone else, shooed his wife from the room so he could talk about new developments with Uncle Dave! I think the way the wife is treated must have seemed old-fashioned and cruelly dismissive even at the time! Well, Curt Siodmack, who wrote the picture, was an old-ish guy by the mid 50s, I suppose, and not too hep! All things considered, and with due acknowledgement of its low-track enjoyability, I give Creature with the Atom Brain one and a half emanations!
Posted by Burl at 22:30