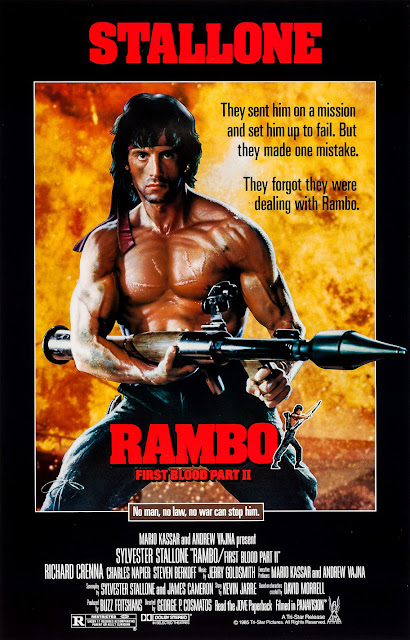 Fighting the battle for cinema, it’s Burl, here to review a continuation of the saga that began with First Blood and apparently ended, in a pretty pedestrian way, ha ha, with Rambo: Last Blood! The installment I’ve got in mind today is the one that was the biggest hit of all, Rambo: First Blood part II! Ha ha, it was a true phenomenon back in 1985, though I ignored both it and all the flying-bamboo-splinter pictures* that followed, like Missing In Action and such stuff!

As the picture begins, our unkempt hero is breaking rocks in the pokey, where he was put after busting up a town and traumatizing its police force in the original picture! Good old Colonel Trautman, played as ever by Richard Crenna from Summer Rental, appears as though out of a dream and offers the taciturn convict a chance to do a mission back in ‘Nam, to discover and photograph any P.O.W.s who’ve been left behind! (Or is that abbreviation pluralized as “P.s O.W.?” Ha ha!)

As ever, our compact, shag-headed hero is played by Sylvester Stallone, known from pictures like Cliffhanger! He’s as clam-lipped as ever, and when he gets to the Far East base of operations, which is an airplane hangar outfitted with all sorts of communications equipment, he finds it staffed by Charles Napier from Last Embrace, assisted by Martin Kove from White Line Fever and Steele Justice, and Andy Wood from The Annihilators! Napier wears a tie and complains about the heat a lot, ha ha, and I think it was a canny decision to cast a tough-guy actor like Napier rather than some pencil-neck to play the duplicitous bureaucrat who has no interest in finding the lost men, and in fact wants to keep the whole problem buried! One assumes a fellow tough customer will be on Rambo's side, but nope!

The action begins when our bandanna-wrapped tousle-head finally makes it into the jungle, after a spot of bother parachuting from his plane, ha ha! He meets his contact, a Vietnamese lady who seals her fate by expressing a desire to make this her last resistance job and move to America in search of the quiet life! From then on, once Rambo discovers a rat-infested cage filled with barely-alive American soldiers, it’s budda-budda this and exploding-arrow that! We get the famous scene where our muscle-bound sweat factory is captured by Russians, who are coloneled by Steven Berkoff from Beverly Hills Cop, dipped in a pigpoo pit, and electrocuted on a homemade bedspring torture mat; and the even more famous scene in which he smears himself with mud Predator-style and camouflages himself against an embankment on the remote chance that an enemy soldier will pause right at that spot for a smoke or a bite of candy! Ha ha, and guess what - it happens!

There are explosions and helicopter chases and bazookas going off and more budda-budda-budda, and it’s all captured in high 80s style by Cobra director George P. Cosmatos, and photographed, if you can believe it, by Jack Cardiff, who shot The African Queen and Ghost Story and many other marvelous-looking pictures! It’s a supremely ridiculous movie, displaying all the subtlety of a Sgt. Rock comic, but apparently in earnest! Its moronic jingoism and crepe-paper warmongery are so cartoonish as to be dismissable with a laugh and a slight wave, and really, so far as I’m concerned, the final word on the picture may be granted to Gremlins 2!

Rambo: First Blood part 2 is deeply dumb and occasionally irritating, but brisk and entertaining too, and so long as you watch it with wallpaper eyes and a frosty mug in hand, I think we can grant it one and a half machoman bucknives!