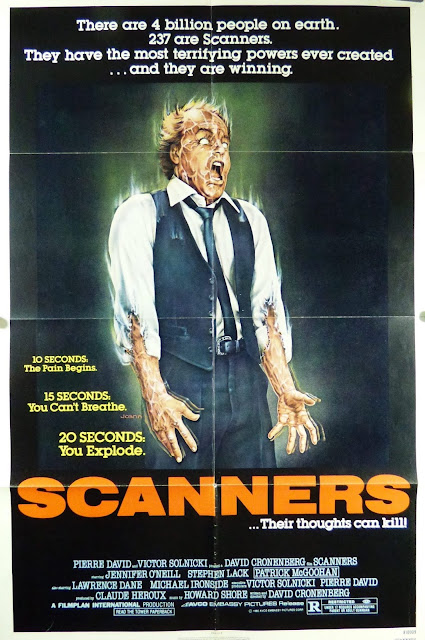 Bzzt bzzt, it’s Burl here, reviewing anew! Today I’m talking Scanners, which is to say the original Cronenberg brainbuster from way back when! Now I’ll admit I was a little too young to go see this picture in the theatre, but I do remember when it came out! Ha ha, there was a bit of a controversy about it up in the home and native land, because here was a Canadian picture, and yet somehow this upstart director had dared to include a scene with poor Louis Ciccone having his head exploded!* How could this be, cried the evening news! And me, I was hooked, and I’ve been a David Cronenberg aficionado ever since!

Scanners was Cronenberg’s attempt to clean up his act for mainstream tastes by removing the more twisted or upsetting elements from earlier pictures like Shivers, Rabid and The Brood, and at the same time was a thematic return to even earlier works like Stereo and Crimes of the Future! So we have down-and-outer Cameron Vale, played by Stephen Lack from The Rubber Gun, who gives a conniption to a nasty food court lady and then is plucked from the rubbish tip by science beard Dr. Paul Ruth! Dr. Ruth (ha ha!) is played by good old Patrick McGoohan from Silver Streak and Escape From Alcatraz, and he does an excellent job of walking the line between the avuncularity other actors would have given the character, and the coldness we’d have had from, say, Christopher Plummer, who I’m surprised never played one of these Cronenbergian scientist-gods!

Dr. Ruth (ha ha!) and the company he works for, ConSec, are only nominally the good guys: they’re recruiting Vale to fight against the evil scanner Daryl Revok, played by Michael Ironside from Watchers and, of course, Red Scorpion 2! Revok wants to breed a whole new generation of scanners and somehow take over the world! Meanwhile there’s an ill-defined group of hippie scanners led by Jennifer O’Neill from Futz and Summer of ’42! We never learn much about their purpose, and anyway they get fairly handily wiped out by Revok’s gang before we start to care too much!

There’s extra intrigue thanks to a ConSec security executive played by Lawrence Dane from Rolling Vengeance, using his talent for playing slimy types of uncertain loyalty to play just that here! And there’s a fine scene in which Lack encounters a crazed artist played by Mr. Sykes from Prom Night himself, Robert Silverman; and since it was Lack who later played the artist-madman for Cronenberg in Dead Ringers, one wonders whether he took notes from his scene with Silverman in Scanners!

Many, including myself, have taken issue with Lack’s lackluster performance in the picture, and his tendency to talk like a non-actor reading the dialogue for the first time off of cue cards! To be sure he never convinces as a societal outcast who’s been cleaned up and ordered into psychic battle - he never questions or resists his duty, and it seems like about a half hour of character development was omitted from the picture! But I’ve grown to appreciate Lack’s performance here - it’s robotic, and has the feel of an empty vessel filled with nothing but what is required to move the plot along, but there’s a strange appropriateness to it also, and the short history of indie-fringe Canadian film acting he brings to the movie (he was in Montreal Main, after all!) makes his casting in the picture seem another daring callback by Cronenberg to his experimental roots!

Those who consider scenes like Vale scanning the ConSec computer to be ridiculous simply aren’t on Cronenberg’s wavelength: he doesn’t care what’s feasible or not, so long as it serves his themes, and so long as, within the ‘drome of his fictional science concerns, it seems feasible! Ha ha! On the other hand, even if it misses the point to believe the plot and computer science of Scanners is goofy, that doesn’t mean it isn’t goofy! Apparently the picture was rushed into production thanks to the vicissitudes of Canadian film financing in that era, and clearly Cronenberg didn’t have time to address all the script issues before rolling his camera! I sympathize with that! Scanners is Cronenberg-lite, of that there is no doubt, but with its general braininess and solid action beats I like it anyway, and give it three Atlanta Rhythm Section posters!

* A word of clarification for non-Canadians: Scanners came out only months before the debut of Seeing Things, a Canadian TV show about a psychic newshound called Louis Ciccone, played by mustachioed slaphead Louis Del Grande, who played the psychic headsplosion victim in the Cronenberg picture! Ha ha! I like these little cultural echoes that happen sometimes!
Posted by Burl at 12:07