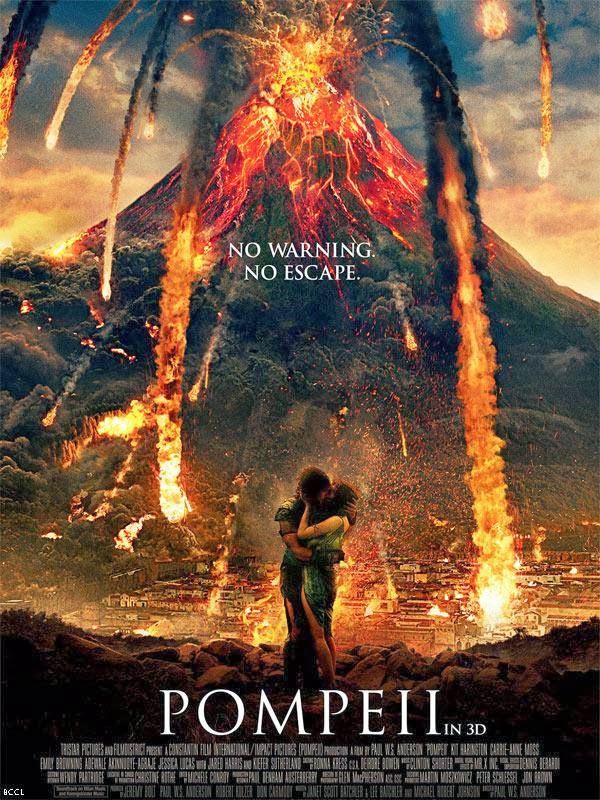 Well met, stranger, it’s Burl, here to review a new sword & sandal spectacular, and a volcano picture to boot! Ha ha, I always enjoy a volcano picture, and if I can – as I did with Dante’s Peak and Volcano – I try to see them on the big screen! (Sadly, or perhaps happily, I had to settle for a VHS viewing of fine pictures like When Time Ran Out and Melody in Love!)
So that is why I recently found myself at a movie theater settling in to see Pompeii! Ha ha, I figured that, coming from the fellow who made Soldier and Event Horizon, it would be a very pulpy and at least moderately entertaining concoction, and I wasn’t far wrong! It features a story in which almost every single occurrence and plot turn – or ‘beat,’ to use the vernacular – is infallibly predictable; characters who do exactly what is expected of him or her; and a visual scheme, which is to say muddy and CGI-heavy 3D, that will surprise no one!
After a prologue in Britannia, the action moves to Italy, where the movie spends a good deal of time setting up the conflicts! We have our taciturn hero, Milo, a gladiator-slave, and his cage-mate Atticus, with whom he enjoys a relationship quite similar to that between Kirk Douglas and Woody Strode in Spartacus! There are cruel overseers and merchants, also straight from Spartacus, but without one ounce of the louche, epicene charm found in the performances of Peter Ustinov and Charles Laughton!
We have the rich family, generally goodhearted folks played by Jared Harris from The Ward and Sherlock Holmes: A Game of Shadows, Carrie-Anne Moss from those Matrix pictures, and Emily Browning from Ghost Ship as Cassia, the daughter! And of course we have the nasty Romans, headed by Kiefer “Stand By Me” Sutherland! Ha ha, Kiefer has fallen for Cassia just as Laurence Olivier once fell for Jean Simmons, though he shows no indication of preferring oysters to snails or vice versa!
All of this trundles along for a while, with the occasional earth tremor or ominous tilt up to Vesuvius to remind us that this is, or will eventually become, a volcano picture! But for long stretches it feels like any old 1960s peplum, and that, I think, is the aspect I enjoyed the most! Ha ha, it felt like I’d gone back in time to a point at which one could go see Demetrius and the Gladiators or Hercules in the Haunted World at your local cinema!
Then the volcano pops and for the rest of the picture we have spewing ash and lava bombs and all manner of PG-13 destruction! Ha ha, there’s some thrills to be had here, but all the clichés of historical spectacle, the constant, goofy anachronism and the rote romance conspire to keep us at arms’ length from everything, and preclude any real involvement in the drama!
I wish the picture was even sillier than it actually is, and that it was better able to transcend the restrictions of its PG rating, but it still fits pretty well into the “expensive B-picture pulp movie” category! Still, in the end it’s just not very good, and almost all the enjoyment I got out of it came from what I myself had brought in! I’m going to give Pompeii one and a half lava bombs, which is an infinitesimal fraction of the number we see in the movie! Ha ha!
Posted by Burl at 11:53

Email ThisBlogThis!Share to TwitterShare to FacebookShare to Pinterest
Labels: 21st century, action, disaster, period piece, saw it on a date, saw it on the big screen