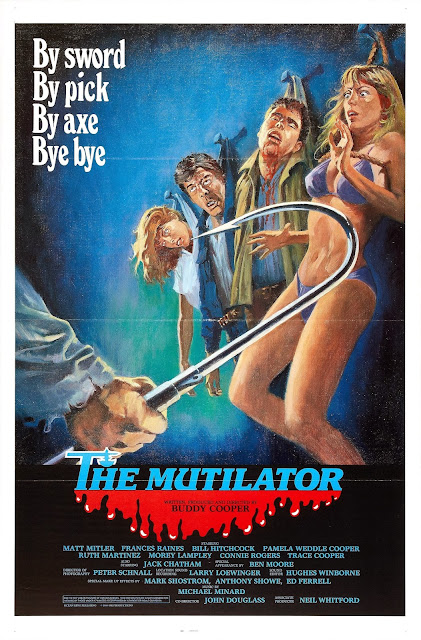 Chop-chop-chop, it’s Burl! Ha ha, you can certainly guess with great ease that I’m reviewing a slasher movie again, and this time it’s one of the more notorious of that disreputable genre! No, I’m not talking about Maniac or Nightmares or Headless Eyes or any of those grimy calomeries! It’s still East Coast though, so it has that soggy, sooty feeling about it, though it's still a long way from The Slayer! Of course the movie I’m referring to is The Mutilator!
I originally watched this one a long time ago; so long, in fact, that I can’t even remember if I saw the cut or the uncut version! Ha ha! I think it might have been the cut one, but all the gore shots were in Fangoria, so I probably edited them into my memory of the picture, same as I did with My Bloody Valentine!
Anyway, great joy awaits the discerning slasher viewer when the credit for Special Makeup Effects pops on in the opening titles, over a terrific theme song called “Fall Break” (the picture’s original title)! We’ve already seen the Traumatic Opening, this time around an accidental matricide by young Ed, which drives his dad Big Ed simply bats! Years later Ed is a grown college student, and he and the gang, on their “fall break” from school (Ha ha, we never had one of those!) head to the windswept and deserted coast to close up dad’s beach condo!
After an awful lot of skulking around and no inconsiderate amount of jokestering from the ginger-haired wiseacre, Big Ed springs into action! I should let you know that this time around I certainly watched the uncut version! (Vestron lets you know on the box, ha ha!) First, Ed grabs an outboard motor and fillets a tall blonde guy in a Members Only jacket and no shirt! Then he does a poking or two and chops a head, and sticks them all up for display since he’s a trophy hunter! This leads to the obligatory Discovering All The Bodies At Once scene, as popularized by pictures like Halloween!
There’s a really unsavory and frankly unnecessary scene involving a fishing gaff, and finally Big Ed gets the car bisection he so richly deserves! But, ha ha, he goes down fighting, that’s for sure! And the very end takes a stab – ha ha – at being realistic about how someone who’d just been through a maniac attack might act!
The actors are a bit amateur theatre, and I can’t say I was wishing the characters were real so I could be their friends, but for a movie with so much potential to be boring – plenty of time before the murders get going, lots of aimless wandering in the dark, a jokester character almost as bad as Shelly from Friday the 13th part 3 – it is, in general, a fairly amiable and enjoyable goof-off! That gaff scene aside, it presents some pretty brutal gore with that little hint of a wink! There’s even a brief Hal Needham-style outtake montage in the end credits, right after that downbeat psychodrama ending! Ha ha!
For giving up the grue like a slasher movie true, and for the minimal beachside atmosphere it manages (which mostly comes from one terrific shot of the nighttime beach as seen through a pair of flapping, wine-red curtains!), and for embodying the spirit of the form, however dismal the form may be, I give The Mutilator two cases of the best! Ha ha, I can’t imagine thinking much of the cut version, though!
Posted by Burl at 00:08