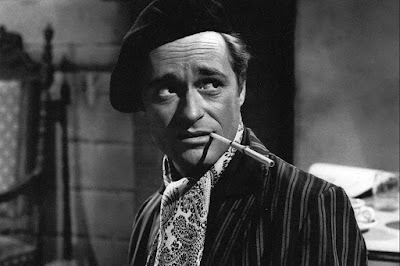 Hi, it’s Burl to review one of my all-time favourite movies starring probably my all-time favourite actor, Dick Miller! Ha ha, don’t expect this review to be very balanced or dispassionate – I’ll tell you right up front that it’s a rave!
The great Miller, well known from Carnival Rock and other fine films, stars as Walter Paisley, the slightly slow-witted busboy at the Yellow Door café! The Yellow Door is a beatnik haunt run by a beret-clad fellow named Leonard and presided over by the haughty, bearded poet Maxwell Brock! (The poems he recites are works of satirical genius from the manic pen of Chuck Griffith, from which flowed the entire wonderful script!) Walter’s only pal is Carla, a friendly girl-next-door upon whom he’s got an unreciprocated crush; and there are other assorted beatnik artistos sitting in various corners of the place! Music is provided by Paul Horn on the sax or, at other moments, Alex Hassilev from that great group The Limeliters!
Well, poor awkward Walter wants nothing more than to become an artist, just as the people whose cups he carries away nominally are! Ha ha, he chooses the medium of sculpture, but proves to have as little talent at that he’s got at clearing tables! An oddball accident involving his landlady’s cat becoming stuck in the wall (the 1995 remake pointlessly wastes several lines of dialogue to make the situation more “believable”) leaves Walter with a dead cat on his hands and the means – clay – to cover it up! His sculpture is hailed as the weirdest, wildest, like, wiggiest thing ever seen, man!
But to stay cool he needs to make more statues, so from there events naturally spiral out of control! You’ve got to know murder is involved, ha ha! Also plenty of marvelous music and some amazing bon mots, all of it revolving around a fantastic performance by Dick Miller! He plays the role to perfection, becoming a wild-eyed, poetry-spouting killer without ever losing audience sympathy! And all the other actors – pretty Barboura Morris, bushy Julian Burton, slimy Anthony Carbone, extra-large Bruno Ve Sota from Attack of the Giant Leeches – are note-perfect as well, the Fred Katz score is great, and we must extend kudos to Roger Corman for some fine direction – it boggles the mind that he made this picture in a mere handful of days!
I can’t tell you how much I enjoy this picture! I’ve seen it time and again, and it just never gets old or wears out its welcome in the slightest! I’ve even staged it as a live theater piece, and let me tell you, it was a hit! I give A Bucket of Blood four and a half zen sticks, my very highest rating! See it as soon as you can, cool cats!
Posted by Burl at 23:35