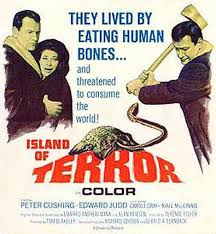 Ha ha, it’s Burl, back again to keep a weather eye out for silicates! Yes, the picture I’m reviewing for you today, Island of Terror, features many silicates: sliding around the island, slipping off cars and dropping from trees! They’re one of the finest examples of a monster that’s hopelessly silly (ha ha, “silly” is even in the name) and yet kind of scary at the same time!
But just what is a silicate? Well, first I’ll tell you what Island of Terror is, or more specifically, what it is not: Doomwatch! Ha ha, and of course Doomwatch is another British horror picture set on a remote island (The Deadly Bees, The Wicker Man and Tower of Evil all fall into this category as well), and for some reason I got it into my head that Doomwatch was the one with the silicates! But nope!
Now we’ve got that all cleared up, I’l tell you what a silicate is! A dedicated island scientist creates them in his lab, and he and his assistants become their first victims! They bust out and roam the countryside, ugly lumps with tentacles on them, searching for people to suck the bones out of! And after a delightful meal of bones, they split in half and spaghetti comes out of them!
Well, after a couple of local softbodies turn up, the island GP flies off to round up a mainland expert! It’s Peter Cushing, thankfully, the actor we loved so well in The Gorgon; and he in turn invites along yet another expert, one of these playboy scientists! The scientist’s ladyfriend tags along, later to her regret, and once on the island circumstances conspire to keep them there, trapped with the increasingly panicky townsfolk and the increasingly numerous silicates, and fearing for their bones!
In a bloody scene, Cushing loses a hand to one of the bonesuckers, but he’s soon bandaged up and out of danger! “One more transfusion and I’ll be a full-blooded Irishman,” Cushing says! Ha ha! Soon comes a climax that involves enough cow-poking for three movies, and though many lose their bones, the silicates are vanquished using science and lot of mooing!
It was directed by Terence Fisher, a director capable of working at a high caliber, and I must admit it’s not his best work! He allows a few scenes to proceed with maddening slowness, as when the scientists don their protective suits (which they don’t do before entering a thick armored door marked DANGER! RADIOACTIVE! in big red letters)! Somehow Fisher’s heart doesn’t seem to have been in this one! However, if you decide to give yourself over to the picture and not laugh at the silicates, there are several tense scenes! There are also a number of lamely-staged attacks, so it kind of balances out! Cushing improves things mightily, as he always did! I guess I’ll give Island of Terror two protective suits!