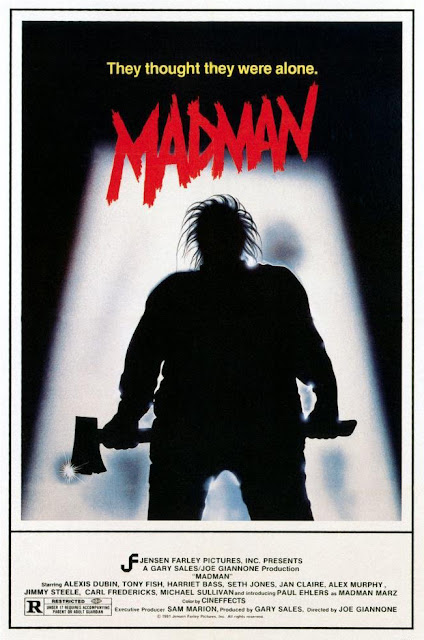 Hi, it’s Burl with another early-80s slasher movie review for you! I have to tell you, there’s a certain sort of slasher movie I always enjoy, and those are the types with the blue cinematography! That is to say that night isn’t black as it is in so many movies – overly so, more often than not, in the case of slasher movies, where they often seem not to have been able to rent very many lights – but rather a bright, shiny blue! A good example of this is The Prowler; another is Sorority House Massacre, and yet a third is the somewhat rare Whodunit! 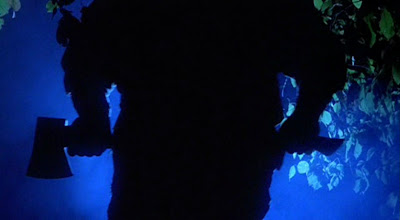 But the bluest of them all is Madman, which takes place entirely at night – no, not one second of daytime in this picture! – and gets a lot of mileage out of the almost otherworldly azure cast of the woodsy outdoors which are the domain of its lumbering, deformed antagonist, Madman Marz! It's worth noting too that under blue light, blood - at least fake blood anyway - looks practically black!
I tend to categorize this sort of movie more than they perhaps deserve, you’ll notice, and elsewhere I’ve discoursed on slasher movies with and without Special Makeup Effects (“with” being generally superior of course), but here’s another division for you: movies whose maniacs are deformed and those who are not! Putting aside the slightly nasty suggestion that terrible injury or deformation makes you automatically homicidal, I’ll say that I usually prefer the maniacs to be a little on the grotesque side! Jason, Cropsy and the big guy from The Prey all qualify! And Madman Marz, whose nose has been bitten off, whose face was cleft in twain by an axe, and who wasn’t anybody’s dream date to begin with, fits that bill as well! Ha ha, imagine a Mount Rushmore with these guys on it!
Madman takes place at a camp for special gifted children, and opens with a very effective campfire spook story telling the tale of Marz, who, legend has it, will return to stalk the woods if his name is spoken above a whisper! One especially special gifted child, Ritchie, takes the dare and shouts insults at Marz from the presumed safety of the campfire! Foolish Ritchie! Soon enough the portly maniac has risen from his farmhouse lair and is preparing to generously dole out the chop!
Meanwhile a strange-looking and not entirely sympathetic counselor named T.P. engages in some hot tub shenanigans with the lady from Dawn of the Dead! But soon people begin to disappear, one by one, as the heavy hand of Marz comes down on them! Ha ha, it gets pretty spooky now and then, as when Ritchie spots Marz staring at them from a perch in the trees! It doesn’t seem likely that such a hefty, overall-clad psychopath could demonstrate such agility, but it’s still a chilling image!
The movie gets pretty bloody too, which is a point in its favor! Ha ha, at one point Marz manages a fancy decapitation simply by jumping on the hood of a truck! He’s also pretty handy with an axe, a rope or just his bare hands! And Marz is one of the more primal maniacs of the genre – he’s so filthy and horrible and murderous that he’s practically a Bigfoot or something! He certainly doesn’t dispense quips with his mayhem – all he does is produce sounds like a Wookee making sweet love to an Ewok!
I’ll give this enjoyable but very minor picture two T.P. belt buckles! It has some bad acting and some worse dialogue, but it’s about as basic a summer camp maniac movie as you can get, as primal as its maniac, and that’s some sort of achievement I guess! Ha ha!
Posted by Burl at 11:21