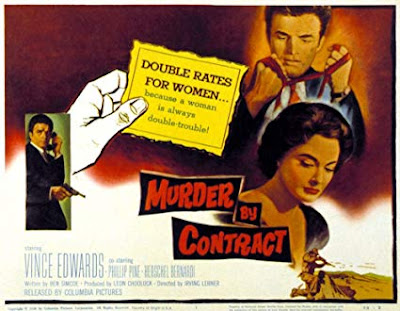 Hi, Burl here to review a lone wolf hired killer movie, which is a genre I certainly like, but don’t have the great love for that some other people do! This is an older one though, and so it has some very special attributes, which I would like to tell you about now!
This is the story of Claude, played by Vince Edwards from Cellar Dweller, and how he became a hitman, and then the bulk of the movie takes us through his most difficult contract! We see Claude’s first few jobs, including a very nicely-done barbershop murder, and the next thing you know he’s a veteran cold-blooded killer-for-hire and on his way to sunny California for an extra-special task!
In California he’s aided and minded by two assistants, Marc and George, who accompany him everywhere as he gets ready to fulfill the contract! Ha ha, but what do you think he wants to do to get ready? That’s right, swim in the ocean, whack a few at the driving range, take in a movie or two, stroll around and see the sights! It drives Marc and George bananas! But he’s the stone-cold expert hit man and they’re just the mob’s bum boys, so they have to take it and like it!
Finally Claude decides to take a look at the person he’s supposed to assassinate, and it turns out to be a lady piano player! Well he’s not too happy about that, and that’s when the plan starts to fall apart and beads of sweat begin to appear on the formerly unshakeable Claude’s brow! As you might guess, this being a film noir, things pretty quickly spiral out of control from there, and all under the watchful eye of Lucien Ballard’s chrome-grey camerawork!
This is a really enjoyable picture, filled with fascinating detail, not so much of the hit man’s methods or of his philosophy, but just of the times! The two actors who play Marc and George are unfamiliar to me, but they play their frustration as high comedy and it works very effectively! They make for a good team, and you almost feel sorry for them as Claude seems to be deliberately trying to drive them nuts for no good reason!
There’s an excellent guitar score that reminded me of the zither music from The Third Man, and I’ll bet it’ll remind you of that very same thing! It works perfectly in this movie, though! And there’s a great climax that involves being in a storm drain, but I won’t ruin it for you by describing it further! I’ll just say that I think you’ll enjoy this small gem of a gangster flick, and I give it three exploding television sets!
Posted by Burl at 23:57