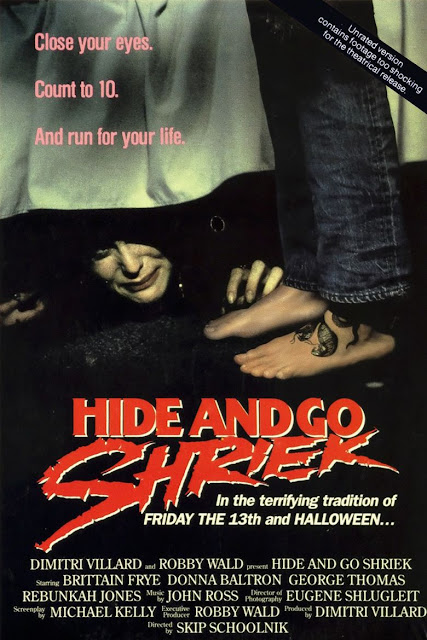 Hullo, hullo, it’s Burl here! It’s time to review another slasher movie, and to figure out even more subdivisions within that exalted genre! Here we have Hide And Go Shriek, which came along a little later in the 1980s slasher parade, but that’s okay! This one takes place in a furniture store called Fine Furniture and as a special bonus has a little bit of the red stuff, including one fairly startling Special Makeup Effect courtesy of a young gentleman whose legal name is Screaming Mad George!
But I’m getting “ahead” of myself, ha ha! There’s a special subdivision of the slasher film that tries to be gritty and urban in its atmosphere, and I guess Abel Ferrara’s Driller Killer is about as gritty as they come! American Nightmare is another one of these, and parts of Visiting Hours fit the bill as well, along with that one scene in The Burning, which is of course for the most part a summer camp picture, and a pretty good one! I have to say that the gritty urban slasher movies rank among my least favorite types of slasher pictures, because they mostly lack the fanciful elements I enjoy, and also usually at least one prostitute gets killed by the maniac; and that happens in real life enough that it’s not too entertaining to see it on screen! Those ladies of the evening have it tough enough already, it seems to me!
Hide And Go Shriek starts out like it’s going to be one of those movies, with a well-dressed mystery man savagely poking a lady of the evening the moment his sordid transaction is complete; but it very quickly and mercifully gives that up to tell the tale of eight teenagers who prepare for what they are certain will be the greatest night of their lives: a campout in a furniture department store! Ha ha, does it get any better!
Well, the teens sneak into Fine Furniture, which actually seems a very drab and boring place, and enthuse repeatedly about the stellar funtime sleepover they’re going to have in there! But of course a certain well-dressed mystery man is in there with them, and he’s evidently got a grudge against recently-graduated high schoolers! Ha ha, I suppose all of us do, but we don’t go homicidal over it! It takes forever for the killings to begin, and after they do it takes another forever for the shouty and objectionable teenagers to figure out that something’s amiss! Of course if they couldn’t figure out that a night in an outlet store wouldn’t be the most delightful night anyone ever had, they probably aren’t the swiftest boats in the fleet anyway!
The well-dressed mystery man turns out to be the jailhouse boyfriend of one of the loading dock workers, and he actually is dressed in leather and nose studs, which makes me think the well-dressed man bit at the beginning was shot and added later to get some murderousness in early! This happens a lot in movies like this, it’s true!
This picture is really quite boring and repetitive, it must be said, even though there’s an unusually generous selection of ladies’ boobs on display! The teens run around the store playing hide and seek for what seems like forever, and then run around looking for their friends for what seems like another forever, but which might be intended as a horrific parallel to the earlier carefree hide and seek! However, it comes across more as the exact same scenes played over again, this time with more shrieking! At least nobody can say the movie fails to live up to its title! The highlight of the thing is clearly Screaming Mad George’s excellent trick effect, which involves a freight elevator and the head of a screaming lady!
I did like the ending, where the whole relationship of the killer and his beloved furniture store employee ex-boyfriend is discussed in great detail at least twice! They treat it as a genuinely tender love affair that just happened to go sour, and it actually was quite touching! But since the characterizations of the people we spend most of the movie with are completely non-existent, I have to call it too little, too late! I give this hucklebuck of a picture one and a half startling trick effects even though the movie itself only contains one!
Posted by Burl at 21:21