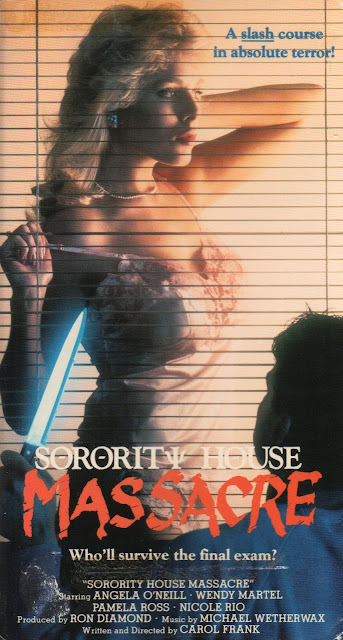 Hi, Burl here with a review just for you! Ha ha, I’ve always admired Roger Corman, and one of his many fantastic qualities is that he apparently went to sleep one night thinking about slasher movies and woke the next day believing that they should be written and directed by ladies! I’m not going to say he’s wrong either, particularly when the first result of this new mode of thinking was Slumber Party Massacre! Great title, great movie, and I’ll review it here sometime soon!
Well, Roger tried to capture lightning in a bottle a second time with Sorority House Massacre, another great title and another lady director! This one belongs to its own tiny subset of slasher pictures, which I’ll call the Heroines With History micro-genre! That’s where the young ladies known as Final Girls have some secret in their pasts, often unknown even to themselves, that connects with the killer or the events in the picture in some way! The Initiation is a very good example of this sort of picture; and a good way to work out how you feel about the Larded With History approach is to watch Halloween, which isn’t one of those pictures, and then Halloween II, which, strangely, is!
It’s usually a pretty blatant attempt on the part of the filmmakers to inject what they would probably call “depth” into a genre they clearly regard as inherently lacking same! Ha ha, and as a bonus we get to see their hamhanded attempts to create profound oneiric imagery, which always come off like parodies of heavy-handed film-school work such as we see in the Kevin Bacon movie The Big Picture or the Brian De Palma-produced picture The First Time! In Sorority House Massacre we get a jar of marbles falling to the floor in slow motion, a photograph of young girls which starts bleeding, a knife coming through a mirror and other such treats! Also, it should be mentioned, much of the night photography is quite blue in color, like Madman or Whodunit!
The story? Well, Beth, an orphan plagued by troubling dreams of being stalked by a t-shirt clad madman, comes to stay at a sorority house for the weekend, for reasons which escaped me! Turns out the house is, by a rather epic coincidence, the very house she lived in until, when she was five, her much older brother went bonkers and pickaxed the rest of her family to death! She, the youngest, managed to escape by hiding in the basement! She’s grown into a comely but troubled lass, and is hoping a weekend of partying with the sisters will help break her out of her funk! But of course big brother chooses this weekend to bust out of the booby hatch, and he’s soon on hand to deliver some brutal pokings to the supporting cast! Ha ha, he gets one couple while they’re making sweet love in a tee-pee so small they have to stand up inside it!
A pretty standard maniac movie, I suppose you’d call this! There are a few witty lines, but most of the picture involves the cast running around the house making really, really poor decisions! I mean not just the sort of bad calls you can excuse because the characters are panicked, or because the filmmakers need to keep the plot moving, but especially egregiously stupid moves, over and over again! And the whole thing plays out as though they were all trapped in a giant soundproof bubble: no matter how much they scream and break glass, nobody in the many nearby neighboring houses ever stirs! Ha ha, in real life, when they were shooting the picture, I’ll bet they got all sorts of noise complaints from those houses! The swearing and catcalls of the grips and electrics, the bellowing of assistant directors, and of course the shrieks and cries of the cast – filmmaking is a cacophonous business!
The biggest trouble with this movie: no Special Makeup Effects! It’s all just knives poking into stuffed shirts and a little bit of blood here and there! That’s too bad, because the rest of the picture is entertaining enough that a few trick effects and a little proper gore would have brought it up to the status of (very, very) minor classic! Oh Roger – sometimes saving a buck just isn’t worth it! I give this too-dry movie one and a half ludicrously low-security asylums!
Posted by Burl at 09:28