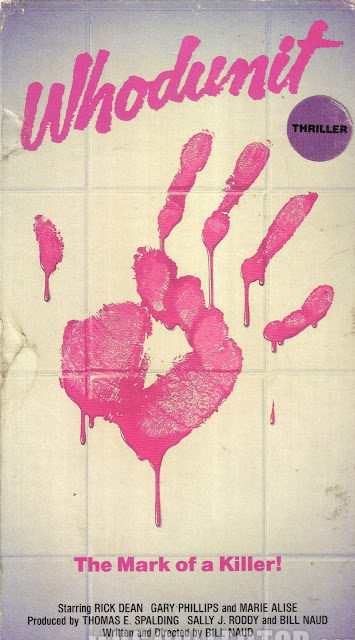 Hi, ha ha, hi, it’s Burl here! Over several of my recent reviews I’ve been assembling something of a slasher movie taxonomy, and I’ll continue breaking the genre down for you now! We’ve heard about Makeup Effects movies and Non Makeup Effects Movies; we’ve heard tell that some slasher movies are very blue looking; we know that sometimes the killer is hideously deformed and sometimes not! Well, here’s another categorization for you: sometimes the identity of the killer is known from the beginning, and sometimes it’s intended as a mystery!
Whodunit?, as should be pretty evident from the title, is a slasher of the latter sort! Like Madman it's very blue in appearance (it was shot, and also produced, by Thomas Spaulding, whose most famous cinematography credit is the original 1958 The Blob, ha ha!) and features a few gruesome makeup effects! So that’s where it sits in the pantheon; but, since the odds are that you’ve never seen this rather obscure picture, you’re probably more particularly wondering 1) what it’s about, and 2) if it’s any good!
Well, it’s about a group of people gathering on an island somewhere – it reminded me of the island from The Slayer, actually – to shoot some kind of up, up with people sort of a movie, about young people putting on a big show in an uncle’s barn or something! They’re just there to rehearse actually, in preparation for the shoot! Anyway, some mysterious person starts playing the most repetitive, annoying rocknroll song ever on a little cassette player, and then this whoever-it-is kills according to the manner suggested by the lyrics of the song! Boiling, chopping, burning, sawing – all of this mayhem occurs in the dumb song, and that’s what happens to this group of silly people!
There’s a misanthropic musician, a mean, bitter girl on crutches, a fresh-faced debutante, a glasses nerd, a he-man, and many more, including the foolish movie director named Mr. Phlegm! That’s right, I should mention that the movie tries to be a bit of a comedy too, but fails pretty completely at that! There’s a bunch of novelty killing though, which always makes things more interesting than simple pokes with a knife! One fellow gets boiled in a swimming pool! Ha ha, how do you get a whole swimming pool to boil unless there are some kind of supernatural forces at work, like in This House Possessed? An unlucky lady gets a battery acid shower, and there are several pokings, an axing and a chainsawing! I think someone even gets blown up!
Then there’s a lot of running around the deserted structures on the island, and after that a twist ending! It’s not the most unexpected twist in the world, but it’s not bad either! There were long stretches when it seemed like this movie would never end, the script and acting are bad and that terrible song is annoying, but even with all that, it’s not the worst movie in the world! At least it tries, which is more than you can say for some movies of its ilk! I’m going to give it one and a half glasses nerds – the half coming after the unfortunate glasses nerd runs into the business end of an axe, ha ha!
Posted by Burl at 22:12