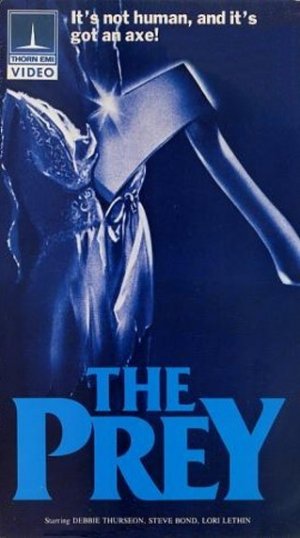 Ha ha, it’s Burl, friends! It was not so very long ago that I sat down to watch a little film, by name The Prey! This was the tale of a group of youngsters from California, or maybe Utah, who decided to make a hike into the mountains, with their ultimate plan being to climb down, not up, a cliff! Ha ha, but the viewer is presented with information denied the characters until it is too late: namely, that a very tall man with a monkeyface is stalking the woods, ready to mete out a dire punishment! This he does to a middle-aged couple near the beginning of the film!
There are six youngsters, with each sex equally represented! As the picture progresses, and amid much footage of woodland creatures, they are punished by the very tall man in a variety of ways! One man is whipped with a brutal face rake, and a lady is put in her sleeping bag the wrong way around!
Later, a man’s head is twisted around so that he looks the other way! Ha ha, a fake buttocks was used to achieve this effect! Another man is dropped down the cliff he had so lately yearned to climb, and a lady is bumped into a tree by one of the hideous lunatic’s forest traps! A helpful park ranger is also among the fatally injured, crosseyed and gurgling tomato paste with a pair of huge monkeyhands around his neck! In the final minute of the film, the madman’s plan is revealed to the last remaining lady: he would like to start a family of his own in the woods!
But it was not the heartwarming narrative of The Prey which so held my attention! It was, rather, the many sequences showing birds, animals and insects in their natural habitat! From the fearsome hoot owl to the lowly centipede (who makes marching sounds like a North Korean military parade!), all of the forest fauna are represented! Ha ha, are they ever – it’s like a slasher movie directed by Terence Malick!
Many odd things happen in the picture! The forest ranger tells a joke to his friend the deer, and this is a scene you will not soon forget! As for where this film fits in my loose slasher taxonomy, I will note that, as in The Burning, we have a heavily disfigured manic; like Madman and The Prowler, the photography can at times look a little blue; and there are on occasion one or two Special Makeup Effects!
The cast is fairly lackluster, but they do okay! Steve Bond from Massacre at Central High is in there, and Lori Lehin from Bloody Birthday; we have Jackson Bostwick from Tron and The Outing as the park ranger, and none other than Uncle Fester himself, Jackie Coogan, from The Kid and Dr. Heckyl and Mr. Hype, as the park ranger’s other friend! No, ha ha, the manic does not get Jackie, but this was his final film role after a long and storied career! Finally, big tall Carel Struycken, well-known from The Witches of Eastwick, plays the gooper-faced manic himself!
There are quite a few points of mild interest scattered throughout, and the ending is effectively horrific. but it’s ultimately a picture seriously lacking in the sort of pep such stories require! I give The Prey one and a half wide-mouthed frogs!
Posted by Burl at 15:03