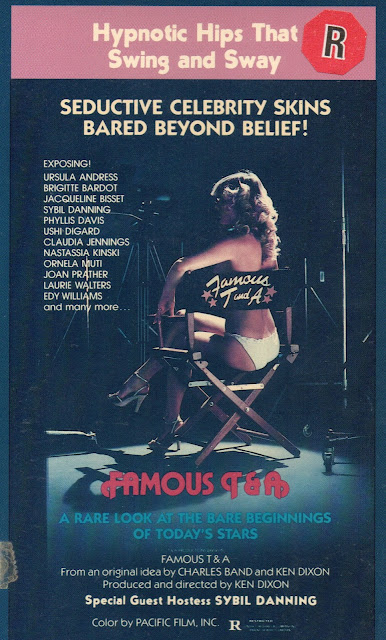 Burl coming at you with a review of one of those clip movies! Ha ha, you probably remember those things – they made quite a few of them back in the 1980s, mostly of horror movies! There was Terror on Tape, Terror in the Aisles, Filmgore, The Best of Sex & Violence and It Came From Hollywood, and probably more! They would usually have host segments featuring people like Donald Pleasance or Nancy Allen or John Candy or Cameron Mitchell or John Carradine or Elvira or Cheech and Chong, and then there would be clips from various movies, sometimes organized into themes or sometimes just random!
Famous T & A, hosted solo by Sybil Danning, has its own general theme, which is the boobs and bums of semi-famous and not-so-famous ladies of the silver screen! Other than that it seems to have been organized much in the manner that Jackson Pollock organized his paint droplets! The whole thing opens with Sybil putting on some sexy golden-tin armor and waving a sword around, and then she intones some crazy, sometimes factually incorrect monologues about the beautiful ladies who have dazzled us with their pulchritude! We then get clips from movies like Tanya’s Island, Slave of the Cannibal God, Sweet Sugar and Truck Stop Women, occasionally broken up by some more sword-waving from Sybil!
A few of the clips come in the form of trailers, particularly for The Single Girls, and for Terminal Island and Sweet Sugar we actually get multiple takes of the same scene, complete with slate! They aren’t bloopers or anything like that, just different takes of the same shot! Not very enlightening, ha ha!
All in all, it’s kind of a boring cruickshank of a motion picture! The video box implies that we’ll see all sorts of now-famous people in various states of undress, and sure, we do see naked ladies, but they somehow manage to drain that experience of any prurient interest whatever! Ha ha, quite a feat! But some of the ladies listed don’t even appear in the movie, I’m pretty sure! And worst of all perhaps is the stuff they make Sybil Danning say! My gosh, it makes the end credits of Howling II seem like a exercise in dignified solemnity by comparison! The poor woman – I hope she was at least well paid!
Because I enjoyed a couple of the trailers – I have a weakness for trash-movie trailers, I have to admit! – and because they run the tail credits over a painted, clenched buttocks, I award this stultifying bore a single tit maniac!
Posted by Burl at 11:16