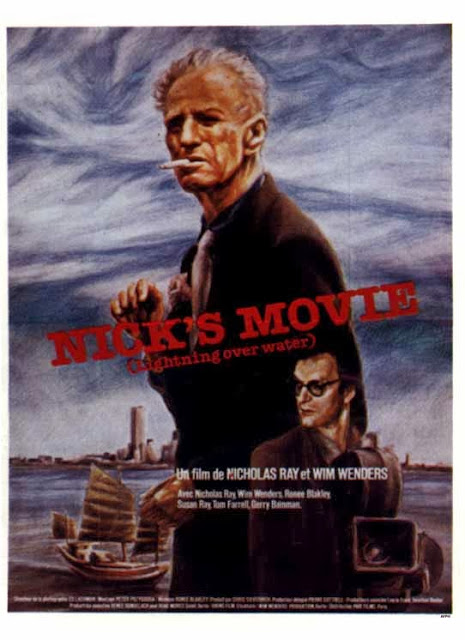 Hi, it’s me, Burl, and I’m back! Ha ha, for anyone who’s counting, this is my one hundredth movie review! Ha ha, it’s all so delightful!
Anyway, I’m here to review the movie Lightning Over Water, which I guess fits into the same microgenre as another movie I reviewed a while back, Voyage in Time, which followed director Andrei Tarkovsky around Italy as he prepared a new movie! This one is about director Nicholas Ray as he tries to make a new movie with his pal Wim Wenders, but the grim spectre of death gets in the way! Talk about your microgenres – I guess you’d call it the autobiographical movie director semi-documentary! There are probably some more out there, and if I come across one, I’ll be sure to review it! Or if you think of one, be sure to let me know about it! Ha ha, thanks!
Lightning Over Water starts with Wim Wenders arriving in New York to hang out with his buddy Nick, the great director of such classics as Bigger Than Life! Nick is awfully sick though, and they decide to collaborate on a movie that would essentially be about Nick and Wim trying to make this movie! Of course it’s really a movie about Nick Ray dying, and about the passions that had kept him going this long (movies; smoking), and about the little world of acolytes he’s gathered around him for the final act of his life! And in the background, Susan Ray, his wife, wears a slightly strained expression and practices a lot of yoga! This can’t have been a very easy time for her, so she’s a pretty impressive character in her own right!
She’s also proved a good steward of Nick Ray’s life and work in the years since his death, recently having seen through to release his final solo feature, We Can’t Go Home Again, which we see glimpses of in this movie! We also see a nice chunk of Ray’s Robert Mitchum picture The Lusty Men, which I’ve never seen in full! Ha ha, I think it’s time, because it looks pretty great!
Much of Lightning Over Water is Wim Wenders reflecting on Ray, on his relationship with Ray, and on his worries of how this movie they’re making is impacting Ray’s health and his own feelings toward the great director! He relates an argument he has with another acolyte, a guy named Tom, over whether they should be thinking of Nick as a father figure! Tom claims it’s natural and proper to do so, while Wim believes it would just interfere with what the relationship should actually be, and would prevent them from knowing Nick first and foremost as a person in a simple, direct and human way! I appreciate that point of view, but it’s pretty clear throughout that Wenders is caught in a pretty bad case of hero worship, which is sort of the same thing! But that would be hard to avoid with a figure as accomplished and iconic as Nick Ray!
Ray himself is the heart and soul of this movie, of course, and it’s great in that it doesn’t crowd him or ask too much of him, but still makes it clear how scared he is behind his cigare*te-smoking tough-guy façade! We also get a sense of the betrayal he still rightly feels at having been dumped by Hollywood in the early 60s for being a troublemaker and a boozehound! It’s a sad story, but the whole point of Lightning Over Water is to provide Ray a chance to go out with his head held high, and by that measure, and by most others I can think of, it’s a marvelous success! I give Lightning Over Water four hacking morning coughs!
Posted by Burl at 09:49