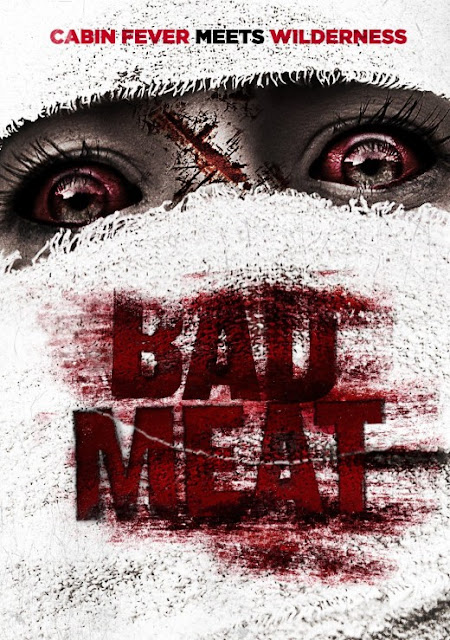 Hi, Burl here to review a crazy new horror picture! This one is called Bad Meat, and it was apparently shot in bits and pieces over the last few years, and stitched together much in the manner of your classic Frankenstein Monster! You can really tell that it was a tinkered-with production, but I have a soft spot for those special sorts of movies which, because of whatever problems that happened to have come up, are put together by different groups of people into a unique new movie that no one could have planned or predicted, and to which no particular authorial voice can be ascribed! It’s as though the Fates themselves made the movie, ha ha!
The picture begins with a spooky sequence in a hospital room, where a totally unidentifiable bandaged mummy of a patient tells, or rather types out, his or her story of how he or she got that way! It seems there was a terrible discipline camp out in the woods somewhere that was staffed by Nazis, wrestlers and she-devils, and these meanies terrorized a group of teenagers who had been sent there by their presumably nasty parents!
Well, they’re an unpleasant enough group of councilors, and are led by a neo-Nazi played by Mark Pellegrino from Mulholland Drive, but they get even worse when the cook feeds them some spoiled meat! For whatever reason this turns them into crazed flesheaters who vomit all over, fart a lot, and chase the kids hither and yon, hoping to pop them into a stewpot next! Meanwhile the kids, who are an argumentative bunch indeed, have to learn to somehow work together to escape or vanquish the hideous flesheaters!
It all ends rather suddenly in the middle of an attack! I guess we’re to assume the nasty bunch won out in the end, leaving only a single victim alive, but so hideously injured as to be absolutely unidentifiable; and that the final horror we take home with us is the thought of that poor person trying to recuperate, just as all those poor people deformed by chimp attacks have to! At least that’s what I took away from it, and I have to admit it gave me the willies!
This movie’s sure gross! There are some gory bits of course, but worse still is all the chunder and poo that splashes around everywhere! Yuck! And the beef stew that causes all the trouble is also very disgusting, and of course so are the characters and situations! You can almost smell the terror! So on that level, which is a pretty base level indeed, the movie succeeds!
Dramatically, perhaps not so much! I guess it never really was finished, but as I said, I don’t really mind that, and am personally pretty fascinated by these pariah dog pictures! The inconclusive ending gives the whole thing a strange avant-garde aura that I suspect is better than what we’d have gotten if the movie had been completed as planned!
Still, I’m not going to give the thing a totally ringing endorsement! It’s for certain very specific tastes only, and you probably know who you are! I’ll just say that this is a bizarre, perverse and ultimately compelling exercise in filmmaking at random! I give it two exploding pillows!
Posted by Burl at 14:09