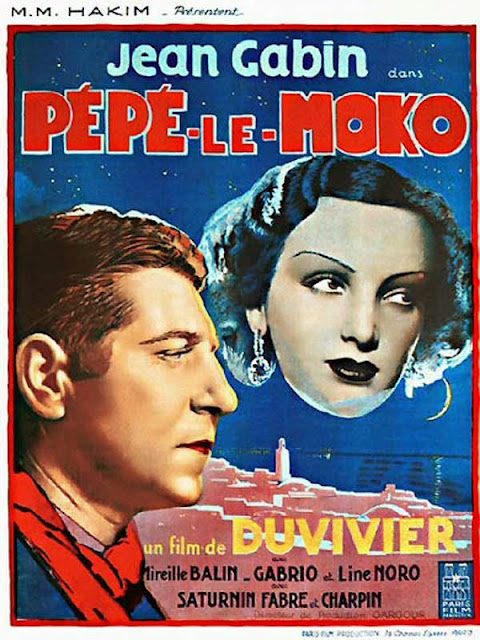 Burl reporting for duty! Ha ha, it’s time to review an elderly classic, the fine, exotic French crime picture Pépé le Moko! It’s a colonial picture, which is a genre I like quite a bit – movies about consuls, for example, and especially dipsomaniacal ones, are usually fine entertainments for the likes of ol’ Burl!
But this is not a consular movie! It’s the tale of the most famous robber of Algiers, Pépé le Moko, who is beloved throughout the Casbah and is hidden within that labyrinthine quarter by its devoted denizens, who revere him because he’s the most charming and accomplished thief who ever was, and also something of a Robin Hood figure! Whenever les flics come in to arrest him, the good people of the citadel band together to baffle and misdirect them away from their debonair folk hero! This of course frustrates the cops to no end! The Shareef don’t like it, ha ha!
But of course, should Pépé dare to leave the Casbah, he’ll be nabbed by the men in blue the moment he ventures out! So while he rules the quarter and commands total respect from its inhabitants, he’s pretty much a prisoner there! Ha ha, he’s tired of being trapped in there, and tired of his beautiful gypsy-eyed girlfriend! The story follows him as he falls in love with a fancy-pants Parisienne, whom he happens across while she’s slumming one night in the Casbah, dripping with jewelry and briefly on the lam from her old frog-faced industrialist of a boyfriend!
Well, Pépé succeeds in capturing her heart, but now he must outwit the sly, patient police officer who has befriended him, and seems always able to find him just to have a chat now and then, but still amiably maintains that one day Pépé will screw up, and there he, Inspecteur Slimaine, will be, waiting with handcuffs at the ready and his fez cocked at a rakish tilt! It’s a great template for all the sympathetic cop-criminal relationships seen since in the movies, with Heat being a particularly good example!
This is the movie that made Jean Gabin a big star and led to him trying his hand at Hollywood in Moontide! And no wonder, because in the role of Pépé he’s as suave and slick as can be, but manages to display both a fundamental decency and an absolute ruthlessness at the same time, all swirled up with the chewy romantic center you’d expect to find in any Gallic master criminal! Of course the picture ends on a note of high romantic tragedy, of the sort we don’t hear played much in movies these days!
The centerpiece of the picture is a long scene in which the local snitch, who’s managed to manipulate one of Pépé’s very closest pals into getting nabbed, is cornered by Le Moko and his gang and has to sweat it out as they get closer to the truth of his treachery! It’s a good scene, with this old grass sweating bullets and playing what he begins to realize will be his last hand of cards! I also liked the exotic atmosphere of the movie, which actually was partially shot in Algiers! The rest was shot in Parisian studios I guess, but the Casbah atmosphere is thicker than mule paste throughout!
I give this fine old classic three and a half ill-timed foghorn blasts!
Posted by Burl at 23:04