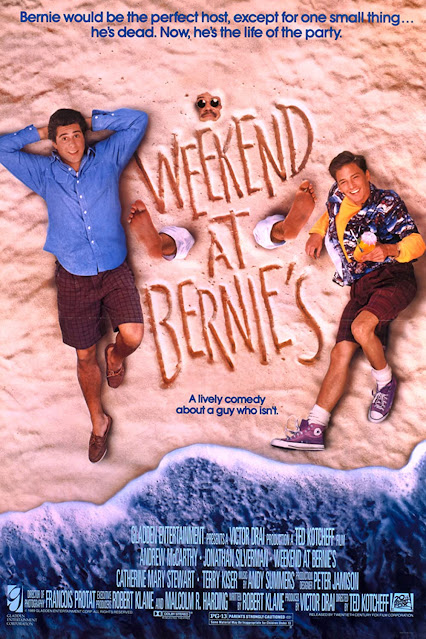 Well, a Burl’s got to review movies, so here I am with another one! Weekend at Bernie’s is one of those 80s comedies that I never got around to seeing back when they were new, and so in the years hence never got around to checking out at all! Until recently, that is! A friend of mine was astonished that I hadn’t seen it – frankly, he couldn’t quite believe it! It was like I’d never seen Star Wars or something like that, ha ha!

Anyway, he persuaded me that it was a mistake I should work hard to rectify, so I finally checked it out! Ha ha was it worth it, you might want to ask? Well, something momentous happened to me between when I started the movie and when I finally saw the end of it – I don’t want to get too specific, but I will say that, completely regardless of the movie’s quality and how much I did or didn’t enjoy it, Weekend at Bernie’s is now inscribed in my personal mythology in flaming letters of golden honey! Ha ha!

Everybody knows the plot of this one, I think! A couple of schmoes from New York City (Andrew McCarthy from Heaven Help Us and Jonathan Siverman from Brighton Beach Memoirs) get in tight with their boss, Bernie, and wangle an invite to his curiously tropical hideaway in the Hamptons! Well, wouldn’t you know it, Bernie has his own reasons to want to kill these two guys (and we the audience have ours!), but before that can be pulled off, Bernie himself is killed by lethal injection! Well, the next thing you know, a party is in full swing at Bernie’s beach pad, and Bernie is in the middle of it but somehow nobody realizes he’s dead! Except the two guys of course, and they spend the movie bumbling around and acting like some seriously stupid idiots, and somehow Catherine Mary Stewart from The Beach Girls is involved!

There’s really about one joke with maybe twenty variations throughout the movie: Bernie is dead, but he has this little crooked grin on his face, and is wearing a pair of sunglasses, and so people assume he’s alive and being the life of the party as he’s apparently always been! No one asks why he never changes out of his blue windbreaker! He gets bumped around quite a bit, and at one point the boys staple his toupee to his head, and so I wonder if, after all was said and done, the local cops charged the schmoes with performing an outrage against a corpse! There’s a Weekend at Bernie’s II, but I have to admit that the first installment didn’t make me all that curious about what might happen in future adventures of Bernie’s cadaver or its two idiotic buddies!

There were a few pretty good moments though, and I thought there was some clever usage of the actor who played Bernie (Terry Kiser from Friday the 13th part 7), and also of whatever rubber body was used to simulate him, so the movie was certainly not a total loss! It wasn’t the second coming of Citizen Kane though, as my friend seemed to feel it was! I give it one thong bathing suit and a special sideways smile!
Posted by Burl at 09:45