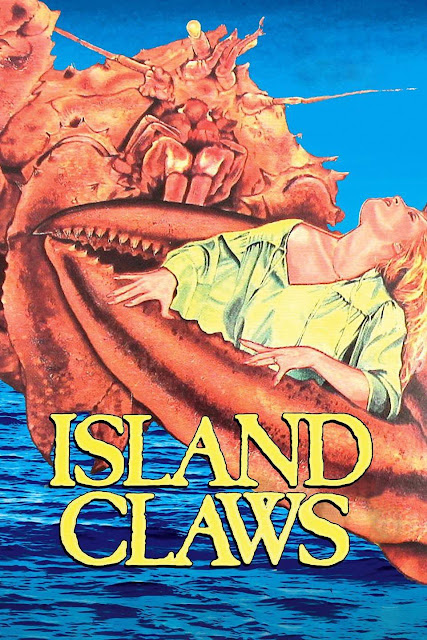 Hi, Burl here! I’m back with another review, this time of a movie that, ha ha, might make you a little crabby! It’s Island Claws, and if you’re wondering just what it’s about, well, it’s about a giant crab! A giant roaring crab at that, ha ha! (I should mention that, unlike the crustaceans in Attack of the Crab Monsters, it never uses telepathy!)

As part of my self-imposed summer reading program, I tackled a book called Killer Crabs not too long ago! It wasn’t too great a book, but it delivered what it promised on the tin – plenty of crabs a-killing! Island Claws is pretty similar, except the budget allowed for only a bunch of regular crabs and one single oversized specimen!

It seems that a local island laboratory is conducting experiments on crabs in an effort to make them grow bigger so as to solve the problem of world hunger! Ha ha, what if you don’t eat seafood? But anyway, the scientists soon find that their experiments have succeeded beyond their wildest dreams when people begin to disappear and giant bits of shell are found beneath the sand! And of course the tiny town in which the movie is set, located somewhere in Florida I believe, is beset by tragic happenstances! In one episode, a simple-minded banjo player named Amos returns home to his house-bus and finds it full of normal crabs, and in his slow-witted panic he sets the place on fire! Then we hear a roaring sound and the burning bus tips over slowly! Goodbye, Amos! In another terrifying vignette, a bunch of crabs make a lady fall off her bike!

There are other victims too, and finally the scientists and a gruff, aptly-named bartender named Moody, who is himself crabbier than even the giant crab ever manages to be, gang up on the mighty crustacean as he sits there roaring and waving his pincers about! But crab drama isn’t the only thing the movie has to offer: there’s plenty of soap opera around the human characters too! Moody, for example, feels guilty about something from his past that has nothing to do with crabs, and he also has a feud going with the man who owns a nearby nuclear power plant, and whose daughter is a photojournalist being wooed by one of the young scientists whom Moody has raised as his own son! Ha ha, phew! And very little of this has to do with crabs either! I do wish that more of the movie had been about crabs!

Even though the giant crab just mainly sits there grousing I have to say that he still managed to capture my heart! I cheered him on when he ate a guy and was a little bit sad when the hero scientist harpooned him in the eye with a fencepost; but quickly I realized that, with a dead crab as big as a Burger King sitting in the middle of town, the whole community would have crabcakes, crab salad and even crab ice cream to eat for a year, ha ha!

The movie’s not scary or exciting or very good at all, but it has a seedy Floridian atmosphere that I kind of liked, and it did work hard at creating characters and a story, which I respect even if it didn’t work very well and ate up a lot of potential crabtime! And the movie’s theme music is a jaunty piece of lounge-jazz that you’ll really enjoy, I predict! I give Island Claws one and a half toppling schoolbusses!
Posted by Burl at 09:32