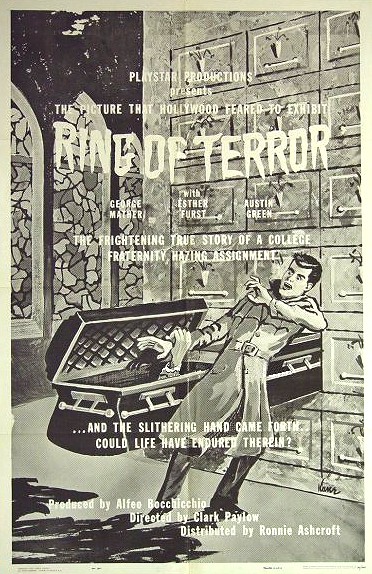 Hel-lo, it’s Burl! Let me take you on a stroll down Graveyard Lane! Ha ha, no, I haven’t turned into a horror host; I’m just quoting Reegor, the cadaverous, string-tie-wearing cemetery caretaker we meet in the opening moments of Ring of Terror, as he searched for his housecat Puma! Reegor prowls the tombstones calling for Puma for about the first half of the seventy-two minute picture, or so it seems, anyway! Puma! Puma! Puma? Don’t be afraid, Puma! Come to Reegor! Pu-ma!
Ha ha! Eventually Reegor finds Puma sitting pretty near the grave of Lewis Moffitt! “Ah ha ha!” Reegor says! “I remember him!” And then the screen goes all wavy, and we’re treated to the story of how Lewis Moffitt met his presumably sticky end! It does for all the world seem like the beginning of an anthology picture with a particularly weak wraparound, as though after Lewis Moffitt’s tale, Reegor’s housecat will go missing again and turn up washing himself on the grave of some other poor sucker with a story; and then it would happen once or twice more before some pithy wrap-up from Reegor! But no, Lewis Moffitt is the only guy we’re going to hear about this go round! Maybe they just ran out of money, or maybe this is an omnibus picture after all, but they decided to make it a single-story omnibus! Ha ha, a bungalow picture, we could call it! Or maybe they assumed Reegor would be such a wildly popular character that this would be the start of a series of anecdotal horror pictures in which he is the recurring character! Or maybe the housecat died before they could shoot any more of his segments, who knows!
So what is this amazing Lewis Moffitt story anyway? Well, it’s hard to imagine Reegor going into as much detail about it in his telling as the movie does in its dramatization; but, in short, it seems that Lewis Moffitt is a dedicated medical student whose apparent lack of fear is disturbing and off-putting to everyone from his girlfriend to his fellow freshmen, to the seniors who are planning the big pledge party and its attendant tradition of uproarious prank assignments! Nobody can understand why Lewis Moffitt isn’t afraid of snakes or dead bodies or peer disapproval! And meanwhile, a goofy chubby couple are trotted out at regular intervals to be made fun of through various unimaginative fat jokes: like, for example, wow, do they ever like eating hot dogs!
Eventually, by way of fraternity shenanigans, Lewis Moffitt’s fear-related Achilles heel is discovered! And the experience which the brothers set up for him is so dreadfully scary that it kills him stone dead! Ha ha! We know from the beginning that he dies, so don’t worry, I’m not ruining anything for you!
The story does become much more interesting, I must say, if you imagine Reegor droning on about the specifics of it, telling the hefty-people jokes and the mundane details of dormitory life or Lewis Moffitt’s relationship with his plain-Jane girlfriend and all the other irrelevant things that happen! It's fun to wonder how, for example, he describes the adventures of the glasses nerd who gets dressed up as Cupid but has nothing to do with the main thread of the story? Ha ha, we can’t know for sure, but if we are to believe this is all a story Reegor is telling us, then I guess he must be relating it some way or another!
Anyway, this is a simple story padded out to an unbelievable degree, but it has all sorts of marvelous aspects, such as the energetic depiction of mid-50s campus life! It makes you feel you were in school at that time yourself, hanging out with your best gal at the cafeteria and listening to the groovy tunes of the Campus Cool Cats, the least-engaged party band ever to grace the silver screen!
It’s a drab, cheap little stinker of a movie, but still surprisingly watchable! I believe it was made fun of on the robot show, so some may prefer to check out that version! Here’s an interesting fact about it: the guy who plays Lewis Moffitt, George Mather, was also the cinematographer of Holy Wednesday! Ha ha, how’s that for an odd connection? I give Ring of Terror one and a half elusive bicolor housecats!
Posted by Burl at 18:45