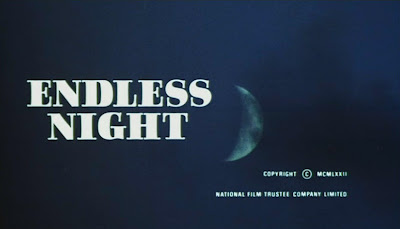 Endless Night is just another one of those Agatha Christie English manor-house mysteries – or so I thought! Ha ha, I was expecting a bunch of British actors and a couple of Americans pottering about in some pastoral setting, trying to figure out who was the murderer, but boy was I wrong! There are a bunch of Brits and some Americans, to be sure, but to me the biggest mystery was not who did the murder, but when is the gosh-darn murder going to happen! And who is the nutty old lady who walks her cats around on a leash?

Hywel Bennett – ha ha! – stars as a dyspeptic young tightpants who has a dream of building a house he can’t possibly afford! But then, in a convenient turn of events, he meets and marries the sixth richest girl in all the world, and she helps him out by buying the special plot of land and then hiring a very strange architect to build it! My goodness, is this house ever a weird one! There’s a swimming pool under the floor and a remote control that does everything from moving walls to closing doors to serving up drinks on a special conveyer belt! Well, it seems the tightpants is really living the dream!

There are some conflicts with the girl’s family, with her female “companion” who is played by Britt Ekland from Get Carter, and with George Sanders, who plays the family lawyer! This was one of the last movies George made before he killed himself because he was bored, and I wonder if this was one of the movies that made him so bored! Not that it’s such a boring movie – in fact, after I got over the disappointment of not getting the drawing-room mystery I’d been hoping for, I found it pretty interesting! There are some spooky bits and Britt Ekland takes off all her clothes! And then eventually there is a murder, and of all people it’s Hayley Mills (only one of her this time around) who gets snuffed! Because of The Parent Trap, I thought there might be a twist involving an identical twin, but no! Or maybe a vengeful cat, but again, no!

Anyway, I don’t want to build Endless Night up too much, but between the strange scary stuff and the Bernard Herrmann score (he uses a Moog!), it’s worth seeing if you like your movies to be a little bit… unusual! Ha ha!
Posted by Burl at 11:23