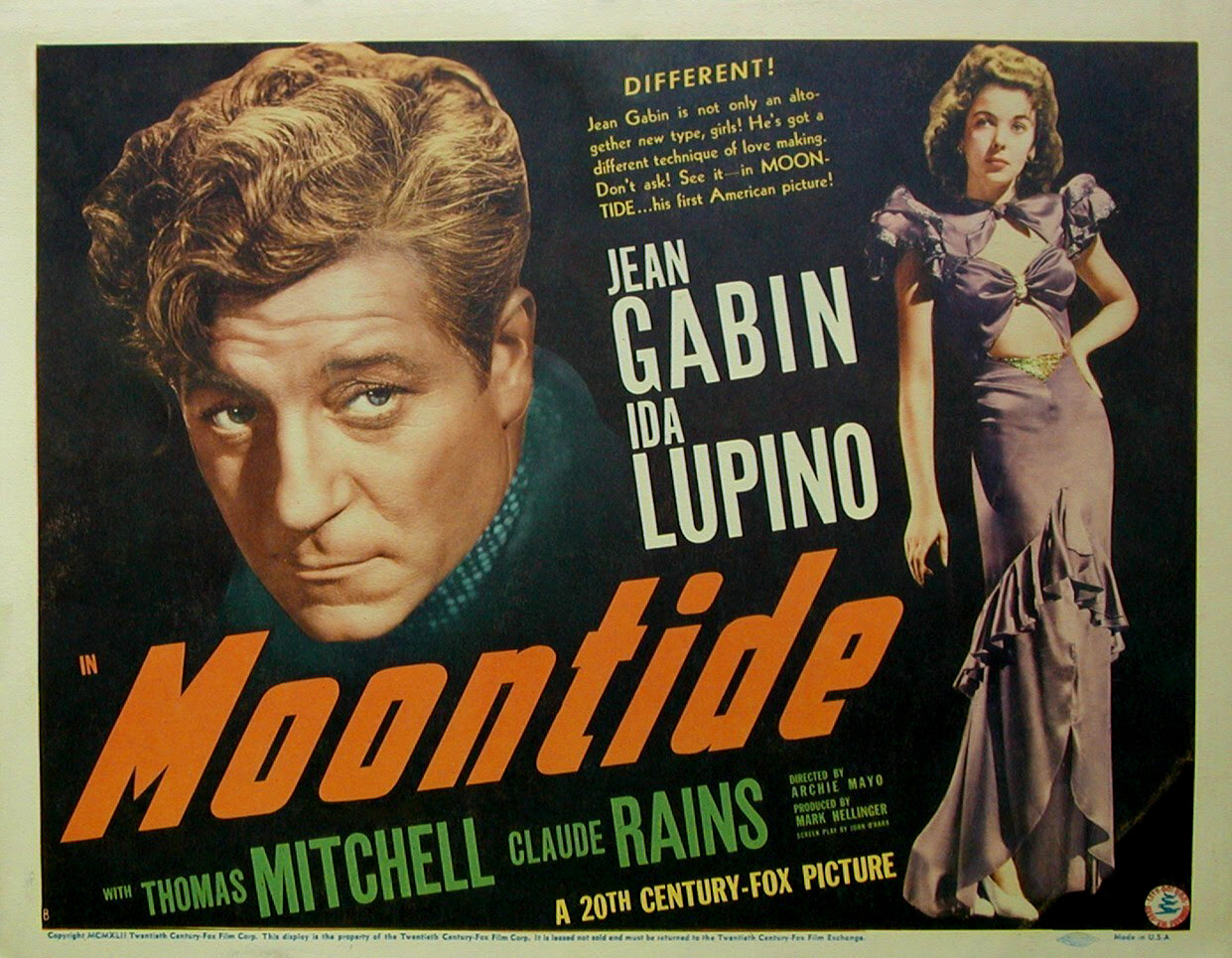 Hi, Burl here to do a review of a classic dramamovie which I’d never heard of before watching it! It’s Moontide, and it was Jean Gabin’s first foray into Hollywood after so much success in France! But he left France because of, you know, Nazis, and this was the story that caught his eye!
It was directed by a guy named Archie Mayo, but it turns out that it was supposed to be directed by Fritz Lang, and in fact old Fritz was at the helm for a couple of weeks before deciding that the combined forces of Gabin and Darryl Zanuck, which were arrayed against him, were too much! He folded his jodhpurs, packed away his pince-nez and off he traipsed! Ha ha, if I’d known Lang had even a small part in the making of this picture, I’d have checked it out long ago!
Well, it’s very Lang, I must say, and it also reminds me quite a bit of one of Josef Von Sternberg’s waterfront melodramas, particularly Docks of New York! Ha ha, I really love those pictures, so when I heard that Moontide took place in a seedy Southern California harbor town, I was sold!
Gabin plays Bobo, the violence-prone dockworker who lives the gypsy lifestyle, weighted down only by his sinister connection to the almost-as-hefty Tiny, an annoying hanger-on played by famed character actor Thomas Mitchell! Bobo likes to drink, and he likes to drink a lot, and a particularly heroic night of consumption leads to what I feel safe in calling the finest Surrealist-inspired drunken montage in film history! Ha ha, they got Salvador Dali himself in to design it, and even though his ideas proved either too disturbing or simply unworkable, a lot of the old brushman’s spirit made it into the sequence!
Turns out an old guy got a pretty stiff neck-twist sometime during Bobo’s binge, large swaths of which he can’t remember too clearly! Did Bobo do the murder? With his mangle-strength hands and hair-trigger temper, he’s certainly capable of it! But the question is less than burning for most of the picture, since Bobo gets a job and a home on a bait barge and coincidentally meets up with a hangdog hash-slinger played by Ida Lupino; and all this makes him think maybe it’s time to settle down!
So Bobo and Ida slowly fall in love and make the bait barge a home, and meanwhile gather a group of fellow waterfronters around them, like the guys who own the barge, a sawbones yachtsman, a bartender and a philosophical night watchman played by Claude Raines! But Tiny is always there in the background threatening to cause trouble, and finally, once Bobo and Ida get married, causing quite a little bit of it!
Seedy waterfront movies, motley-family pictures and proto-noirs are all favorite micro-genres of mine, and this movie is all of those things! Naturally, I enjoyed it quite a bit! It’s also one of those movies where the source material has been so obviously watered down for the morals of the day that the bowdlerization is entertaining in itself! Clearly Ida is meant to be an ex-prostitute, but she gets referred to as a waitress as though “waitress” is simply another word for hooker! There’s a fade to black that screams “rape!” more disturbingly than an actual depiction of the act might have done! And so on!
I give Moontide three fancy-pants drinks and recommend you give it a shot!
Posted by Burl at 12:30