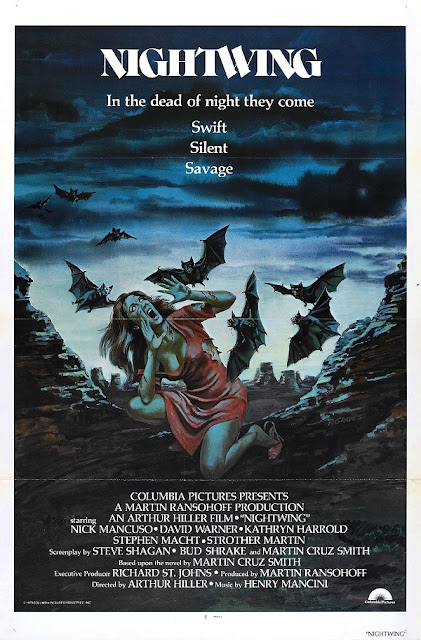 Hi, Burl here, and today I’ve gone bats! Ha ha, I mean I have a review of a bat movie for you, namely Nightwing from 1979! It came out around the same time as Prophecy and is in many ways a similar movie! Both pictures have ecological concerns, touch on themes of aboriginal land and resource rights, were directed by veteran filmmakers not known for horror movies, and have hilarious centerpiece campsite massacre scenes! The two pictures even share the same actor, George Clutesi, as the old native shaman in each movie!

Nightwing takes place in the American Southwest – and some of you will know how much ol’ Burl appreciates a horror or action picture with that particular setting! – on a reservation that is policed by Deputy Nick Mancuso in reasonably creditable redface! Animals are turning up dead, drained of blood, covered in weird bites and surrounded by puddles of ammonia! David Warner shows up in a super-science truck, of the type everyone thought was so cool in the 1970s, to explain that vampire bats are on the rampage and everybody better watch out! Not only will these guys put a real biting on you, they might just decide to give you bubonic plague in the bargain!

I read the Martin Cruz Smith book recently as part of my self-imposed summer reading program, and was impressed by how much research he’d obviously done into both bats and Hopi spirituality! Ha ha, very little of this stuff made it into the movie, and there were even several bat attack scenes that were ignored by the filmmakers too, and the movie suffers from their absence! Reading the book got me thinking that there was a good, exciting, socially aware horror movie to be made of the story, but this picture – from the director of Love Story no less – sure isn’t it!

The bat effects are mostly pretty bad! Carlo Rambaldi, who would later animate a piece of poo and name it E.T., made little bitey bat puppets that look rather stiff, and the optical effects of bat swarms (Flocks? Packs? Colonies?) are as translucent as an old shower curtain and about as threatening! The direction doesn’t help much – it’s fairly clear that Arthur Hiller wasn’t all that interested or able to make a proper, scary horror picture! Silver Streak was pretty good, and maybe he should have stuck with movies like that! Liven it up a bit, Arthur, I kept thinking!

It was nice to see the late Charles Hallahan wearing the same sweater he sports in The Thing, and I thought some of Charles Rosher's desert photography was very nice! Also Strother Martin from Pocket Money shows up at one point, which is always welcome, but then he pretty much disappears and is forgotten about, as are several other characters and situations! There’s plenty of stuff that is so under-explained, like Warner’s motivation for killing bats, or the powers of the hallucinogenic root Mancuso is always munching on, that I’d have been really lost if not for my recent reading of the book!

I have to give Nightwing one single science jeep and a sad shake of the head for the squandered opportunity! Maybe someday someone will remake the movie and do it properly (and Bats doesn't count), but since the original was such a flop when it came out in the summer of 1979, I won’t be holding my breath!
Posted by Burl at 14:53