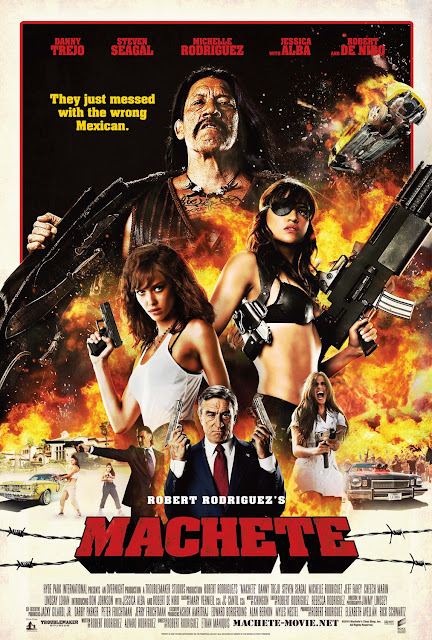 Burl here, friends! It’s time to review a newer movie that’s meant to seem like an older one, Machete! This picture started out as a fake trailer in the Tarantino/Rodriguez Grindhouse amalgam movie, and they use a lot of the very same shots from that one in the feature film version! Ha ha, I guess they kept the costs down that way!

Machete tells the story of the super-Mexican of the same name, who was once a dedicated crimebusting Federale but then caught a bad break in his pursuit of drug kingpin Steven Seagal! A few years later, he turns up in Texas and becomes embroiled in a complicated mock-assassination plot which actually has a strange veneer of credibility given the political circumstances in the United States, what with that loony Tea Party and all! Robert DeNiro plays the nasty state senator who hates immigrants, legal or otherwise! (I’ve crossed swords with a Republican state senator or two in my time, and let me tell you, those guys really are nasty! Petty, but nasty! Well played, DeNiro, ha ha!)

There are bad guys like DeNiro, Seagal, Jeff Fahey and a foul border vigilante played by Don Johnson on the one hand, and on the other there are various kindly or s*xy Hispanics played by such folks as Cheech Marin (who used to be famous for smoking p*t with his buddy Chong!) and Michelle Rodriguez! There are others too, and several of them are n*de ladies, could you believe it! Machete uses the hand tool of the same name to cleave many scoundrels in twain, and sometimes, when he has to, he will improvise with other sharp instruments, or might just blast someone’s head into fishsticks!

I’m saying this is a pretty violent movie, ha ha! It’s a real cartoon, and purposely so; and as a result is able to muster quite a little bit of fun here and there! It would have been nice to see the picture in a large cinema full of raucous people, because the movie would have seemed like a whole peck of fun then! But if you watch it in quieter circumstances, the fact that large swaths of the picture are just plain boring becomes all too apparent! Also there’s lots of stuff that doesn’t make any sense, and not in a good way! Several major bad guys, for example, are killed off in elliptical or downright nonexistent ways! What happened to Don Johnson? I guess he was killed, but ooh, so unsatisfying! And whither Savini? It’s like the lesser henchmen somehow managed to purloin all the good death scenes from the major heavies; or else (more likely) that the production ran low on money in the home stretch!

I do appreciate the political stance the movie took, but it’s pretty broad stuff, really! I realize subtlety is not in Machete’s brief, but it might have been neat to have a crazy, over-the-top movie containing a strong but elegantly woven-in subtext that takes a bit of work to uncover! Ha ha, maybe next time, Robert Rodriguez! I give this movie one and a half hopping DeNiros!
Posted by Burl at 09:44