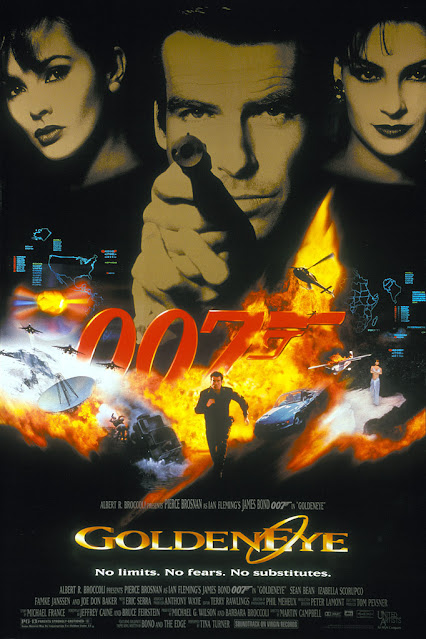 With a cocktail in one hand and a lady in an evening gown in the other, it’s Burl, here to review a bit of Bondery for you! This was the first of a millennium-ending series with new Bond Pierce Brosnan, whom we know from Dante’s Peak and The World’s End, taking over after Timothy Dalton’s abbreviated but perfectly competent run of two pictures, The Living Daylights and License to Kill! The picture I’m talking about is of course GoldenEye!

The other major newcomer is Judi Dench playing M, who would outlast Brosnan and assume the role until Skyfall! She plays it crabby here, and also is the character used to call out Bond’s superannuated sexism, which was a much remarked-upon aspect of this picture at the time of its original release! (Other characters, including Miss Moneypenny and the main bad guy played by Sean Bean from How to Get Ahead in Advertising, mine this rich vein as well!)

The plot: typical Bondism! The opening involves the double-nought hero infiltrating a Russian weapons facility (ha ha, the fall of the Soviet Union is another update the picture must grapple with) and escaping thanks to a spectacular but frankly impossible stunt! Unfortunately he’s left behind his compadre, Sean Bean’s 006, whom Bond believes to have been killed! But it’s all part of a plot by Bean, in conjunction with a hatchet-faced strongman general played by Gottfried Johns from Fedora and an erotic thigh-killer called Xenia Onatopp (ha ha!) played by Famke Janssen from Taken 2, to take control of a Russian satellite weapon that will shoot electromagnetic rays to wipe out computer systems on Earth! Ha ha, pretty much the usual stuff - I think The Man With the Golden Gun had a similar space weapon in it, for example!

Bond hooks up with a Russian lady played by Izabella Scorupco, and then with Joe Don Baker from Fletch, who’d played a bad guy in The Living Daylights but here is a CIA guy emphatically not named Felix Leiter! There’s a nice tank chase in St. Petersberg and a steam room fight with Onatopp in which Bond burns her bum, and much of the movie seems to be captures and escapes! It all ends in Cuba in and around a big giant radar dish that stands as one of the Bond team’s finest miniature trick effects jobs!

The picture is brisk and fun, the script is occasionally clever (though its understanding of mid-90s geopolitics seems a little shaky), and there are some engaging action sequences! Brosnan acquits himself well and was clearly a solid choice for the role! Unfortunately the picture is burdened with a substandard score and a terrible end-credits song, and the opening credit sequence, also with a mediocre song, is dull and cheeseball! But these are minor afflictions, and the ultimate impression is of a Bond movie solidly somewhere in the upper middle of the pack! I’m beginning to think that Tomorrow Never Dies might have been an improvement on this one, but certainly GoldenEye is still streets ahead of the cornliquors that came later, The World Is Not Enough and Die Another Day! Ha ha, pee-yew! I give GoldenEye two Canadian admirals!

Email ThisBlogThis!Share to TwitterShare to FacebookShare to Pinterest
Labels: 1990s, action, Bond, saw it on the big screen, sci-fi, train